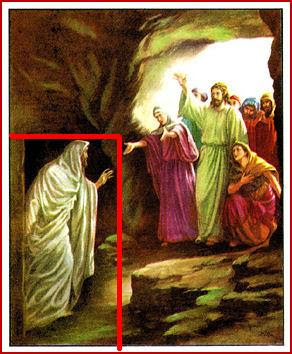 The first and main source of information we have is the Gospel of Lazarus. Bethany lives in a short distance from Jerusalem, as I like to call a residential area. His house is also home to Saint Martha and Saint Mary of Bethany her sisters. And until it feels the Gospel story is not he who calls the shots at the mansion. It seems to Marta who manages the day roost. Someone has been attributed to the poor health of Lazarus that fact certainly rare in a society in which women painted little or at least did not have much to say. Nor do I assert that this assumption is supported by the story, because it could be that the age difference between them is a figure for the prevalence of Martha that perhaps should take over the house after the death of his parents who On the other hand, we have not the slightest reference.
The fact is that Jesus Christ often visited the house well when moved from side to side in his apostolic wanderings when I needed a shelter or rest to rest your tired body. He was comfortable. It was a lovely family. With them there were no secrets. Awaiting the arrival of salvation that God had promised from ancient and they suspected imminent. There was trust and like Jesus entertained pilgrim became worthy of the betrayal of Jesus.
One day Lazarus became ill, there was no remedy among those usually applied to solve its bad and died. However much they brought to Jesus, He came to Bethany four days after he had been buried. Accompanied by sisters, surrounded by his disciples, referred by grieving friends who accompanied the sisters to relieve pain, before the tomb comes a dramatic fact: Jesus was deeply moved and wept openly for the dead friend. Reza and gives an authoritative voice
Lazarus of Bethany, Saint
"Lazarus, come out!" And died four days that he was stinking out the tomb and lives.
Then things happen quickly. The heads of the people who already had between eyes to Jesus, to find that it is impossible to hide the obvious, that people-between curious and amazed "moves to Bethany to see who was buried alive but died days ago, the voices are transmitting a continuous and unstoppable fact that they are left alone, decide to accelerate the death of Jesus and Lazarus include in their plans of extermination.
So much for historical reference about Lazarus.
From this great marvel, the amazing human capacity left free rein to the imagination that recreates the story by putting the host in the crosshairs of the possibilities and begins to generate the fable. Some do match the Lazarus of the parable of Dives and end up pointing to him as protector of infirmaries, leprosy and sore, the boldest talk about him as a disciple of Jesus who comes to the bishop and martyr of Christ ends up dying. Others do navigator to Gaul and tireless preacher of the Gospel in Marseille ...

PRAYER
Father may the disciple of
Christ St.Lazarus help us
get closer to you and our Mother the Virgin Mary
so we to can be come disciples of
Christ and his holy word.
Father may Christ grant us this.
AMEN