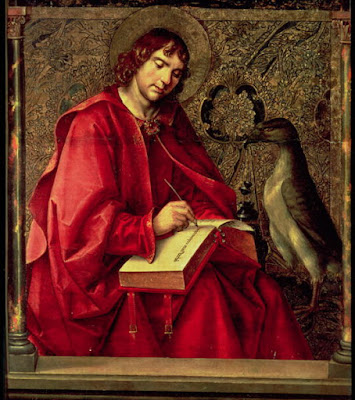 John son of Zebedee and Salome, brother of James, was able to capture images with exquisite literary sublime thoughts of God. Man of spiritual elevation, is considered the eagle that rises to the dizzy heights of the Trinitarian mystery, "In the beginning was the Word and the Word was with God, and the Word was God."
It's the closest to Jesus and he is near at the most solemn of his life. It is with him at the Last Supper, during the process and, alone among the apostles, witnesses his death at the hand of the Virgin. At the foot of the cross John represented us when Jesus told him Mary was his mother. Making Mary our mother . But contrary to what may suggest the representations of art, John was not a fanciful and delicate man, and it would put the nickname Master him and his brother James - "sons of thunder" - to show us a lively temperament and impulsive, outside commitments and doubts, to seem intolerant.
In the Gospel he presents himself as "the disciple whom Jesus loved." Although we can not inquire into the secret of this ineffable friendship, we can guess a certain analogy between the soul of the "son of thunder" and the "Son of man", who came to earth to bring not only peace but also the fire . After the resurrection, John parmanecerá long time with Peter. Paul in his letter to the Galatians, speaks of Peter, James and John "as the pillars" of the Church.
In Revelation John says he was persecuted and relegated to the island of Patmos by the "word of God and the testimony of Jesus Christ." According to tradition, John lived at Ephesus in the company of the Virgin, and under Domitian was cast in a boiler boiling oil, which was unhurt, but with the glory of having given him also his "testimony". After the banishment in Patmos, he returned to Ephesus where he tirelessly urged the faithful to brotherly love, as shown by the three letters contained in the New Testament. He died of old age in Ephesus during the reign of Trajan, circa 98. John is one of 4 Evangelists and 1 of 12 Apostles. John was the youngest apostle.

Prayer
God our Father,
you have revealed the mysteries
of your word thruugh John the Apostle.
May your Divine word lead us
to Heaven.
We ask this through Christ our Lord.
AMEN