St. Eulalia and Julia of Merida 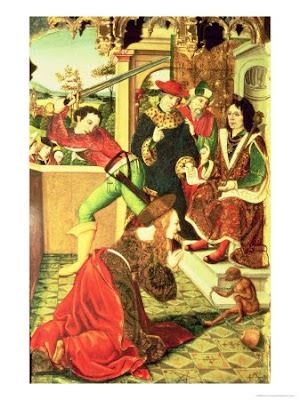 St. Eulalia and Julia of Merida, Virgins and Martyrs. Eulalia and Julia of Merida were born in Spain in the last decade of the third century. It is almost universally accepted that she and her sister suffered martyrdom for the Faith. What little else is known of her to date is based mostly on legend. It is believed that Eulalia, as a twelve year old girl, tried to remonstrate with Judge Dacian of Merida for forcing Christians to worship false gods in accord with the edict of Diocletian. Even though Dacian was at first amused and tried to flatter her, Eulalia would not deny Christ.
St. Eulalia shouted out "Isis Apollo Venus nihil est,Maximianus et ipse nihil:illa nihil, quia facta manu;hic, manuum quia facta colit"
which translates to "Isis, Apollo and Venus are naught,Nor is Maximian anything more;Nothing are they, for by hand they were wrought,He, for of hands he the work doth adore." 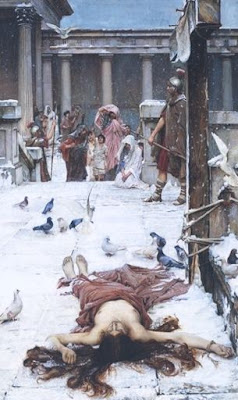 Finally, Dacian ordered that her body be torn by iron hooks. Fire was applied to her wounds to increase her sufferings, and in the process her hair caught fire. She was asphyxiated by the smoke and flames, gaining the crown of martyrdom around the year 304. It is also said that when she was dead a dove flew out of Eulalia's mouth, to this many soldiers cowarded. This frightened away the soldiers and allowed a miraculous snow to cover her nakedness, its whiteness indicating her sainthood.

Prayer
Lord you blessed these 2 very brave girls with the fruit of Martyrdom, let us also wish to shed our blood for your beloved word.
We ask this through Our Lord and Fountain of Salvation, Jesus Christ, with his death and glorious resurrection gave us Eternal Life.
Amen.