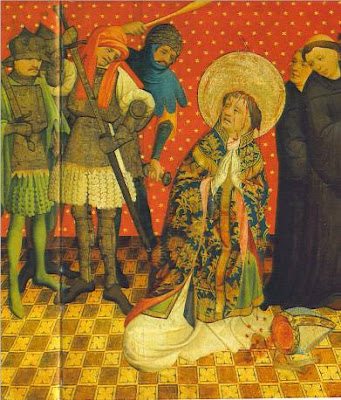 Thomas Becket was born in London,England in 1118. He was a cleric of the diocese of Canterbury,he first became chancellor to the king and then in 1162 was chosen bishop. His tireless defense of rights of the Church against Henry the II prompted the king to exile Becket to France for six years. After returning to his homeland, he endured many trials and in 1170 was murdered by agents of the king, for not denouncing his faith. He was martyred by being decapitated. He was the Archbishop of Canterbury. He is recognized in the Catholic Church as a Bishop and Martyr. His Patron Saint of Independence of the Church against the State. His attributes are the palm of martyrdom and a sword stuck in his skull. He was canonized by Pope Alexander III.

Prayer
Almighty and eternal God may
the life and martyrdom of your servant Thomas
help us be born in you in heaven
so we to can be saints.
AMEN
attributes Bishop canonized Canterbury Catholic Church chancellor diocese Henry the II martyred martyrs Patron Saint Pope Alexander III