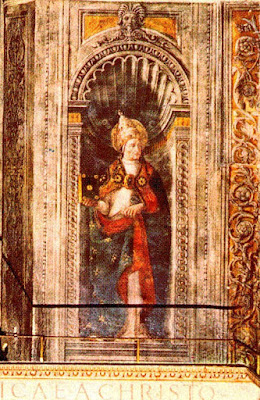 Felix was chosen as Pope on 5 January 269. Felix was the author of an important dogmatic letter on the unity of Christ's Person. He received the emperor Aurelian's aid in settling a theological dispute between the anti-Trinitarian Paul of Samosata, who had been deprived of the bishopric Antioch by a council of bishops for heresy and the orthodox Domnus, Paul's successor. Paul refused to give way, and in 272 the emperor Aurelian was asked to decide between the rivals. He ordered the church building to be given to the bishop who was "recognized by the bishops of Italy and of the city of Rome". The notice about Felix in the "Liber Pontificalis" ascribes to him a decree that Masses should be celebrated on the tombs of martyrs, The author of this entry was evidently alluding to the custom of celebrating Mass privately at the altars near or over the tombs of the martyrs in the crypts of the catacombs ,while the solemn celebration always took place in the basilicas built over the catacombs. This practice, still in force at the end of the fourth century, dates apparently from the period when the great cemeterial basilicas were built in Rome, and owes its origin to the solemn commemoration services of martyrs, held at their tombs on the anniversary of their burial, as early as the third century. Felix probably issued no such decree, but the compiler of the "Liber Pontificalis" attributed it to him because he made no departure from the custom in force in his time.
It is not certain that St. Felix I was a martyr but if he is then may GOD recieve him in his glory.

Prayer
Lord you gave Felix I the strenght to lead your church may we recieve all blessings that he now bestows upon us.
We ask this through Christ our Lord.
AMEN.
Bishop of Rome. catacombs December 30 martyr Pope Pope Felix I