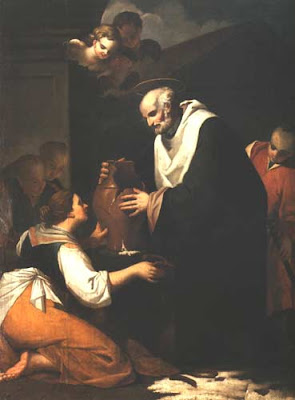 Born at Kenty, near Oswiecim, Diocese of Krakow, Poland, 1412 died at Krakow, 1473, and was buried there under the church of St. Anne; his feast is on 20 October. He was the son of Stanislaus and Anne who were pious country people; he received his primary education at his native town, and then being sent by his parents to the Academy of Krakow, he soon impressed his professors and colleagues with his pleasant and amiable disposition; always happy, but serious, humble, and godly, he won the hearts of all who came in contact with him. Having made excellent progress in the study of philosophical and theological sciences, he was graduated first as bachelor, then as master and doctor, was ordained priest and then appointed professor of theology at the Academy of Krakow, from where he was sent, after a short time, by his superiors to Olkusz, Diocese of Krakow, to be parish priest. Being afraid of the great responsibility of parish work, he very soon left the parish, and was again appointed professor of Sacres Scripture at the Academy of Krakow, which position he held without interruption until his death. As testified by Michael Miechowita, the medieval Polish historian and the saint's first biographer, extreme humility and charity were conspicuous in his life; he took as his motto:
Conturbare cave: non est placare suave,
Infamare cave; nam revocare grave.
He distributed to the poor all the money and clothes he had, retaining only what was absolutely necessary to support himself. He slept but little, and on the floor, ate very sparingly, and was a total abstainer from meat after he became a doctor. He made one pilgrimage to Jerusalem with the desire of becoming a martyr among the Turks, and four pilgrimages to Rome on foot. During his life he performed various miracles, which were multiplied after his death at his tomb. He was canonized by Clement XIII in 1767. The Roman Breviary distinguishes him with three hymns; he is the only confessor not a bishop who is thus honoured.

Prayer
Father may your servant
John help us get closer to your Divine
Church.
Please grant us this through
Christ our LOrd.
AMEN