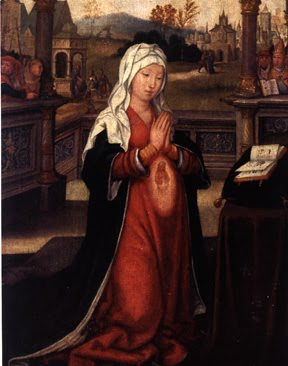 In the eighth century it became a feast of the Roman Catholic Church. It is the only one of Mary's feasts that came to the Western Church not by way of Rome, but instead spread from the Byzantine area to Naples and then to Normandy during their period of dominance over southern Italy. From there it spread into England, France, Germany, and eventually Rome.
Prior to Pope Pius IX's definition of the Immaculate Conception as a Roman Catholic dogma in 1854, most missals referred to it as the Feast of the Conception of the Blessed Virgin Mary. The festal texts of this period focused more on the action of her conception than on the theological question of her preservation from original sin. A missal published in England in 1806 indicates the same collect for the feast of the Nativity of the Blessed Virgin Mary was used for this feast as well.
The first move towards describing Mary's conception as "immaculate" came in the eleventh century. In the fifteenth century Pope Sixtus IV, while promoting the festival, explicitly tolerated those who promoted it as the Immaculate Conception and those who challenged such a description, a position later endorsed by the Council of Trent.
The proper for the feast of the Conception of the Blessed Virgin Mary in the Medieval Sarum Missal, perhaps the most famous in England, merely addresses the action of her conception.
The collect for the feast reads:
O God, mercifully hear the supplication of thy servants who are assembled together on the Conception of the Virgin Mother of God, may at her intercession be delivered by Thee from dangers which beset us.
In 1854, Pius IX made the infallible statement Ineffabilis Deus: "The most Blessed Virgin Mary, in the first instant of her conception, by a singular grace and privilege granted by almighty God, in view of the merits of Jesus Christ, the saviour of the human race, was preserved free from all stain of original sin."

PRAYER
Lord, you chose your Mother the Virgin Mary,
to be kept free from Original Sin,
let us ask for her glorious intercession so that we may forgiven from our sins
and saved from eternal damnation.
We Pray to her 3 Hail Mary's.
Mother may your love and blessings be with us always.
In the name of the Father, Son, Holy Spirit. AMEN
Day of Holy Obligation December 8. Immaculate Conception Mother of Christ Virgin Mary