December 22, 2009
Bishop of Nilopolis, in Egypt. When the persecution was instituted by Emperor Trajanus Decius, Chaeromon was an elderly man. He and several companions fled into the Arabian desert and were never seen again. The bishop and his companions are listed as martyrs.


There is hardly anything known about Saint Chaeromon other than the information written above. 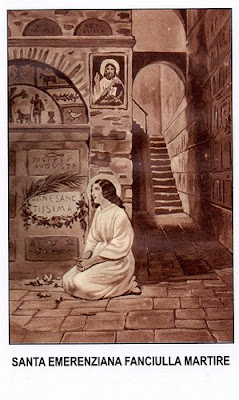 Emerentiana was around Saint Agnes' time, because her mother was the nurse and nanny of St. Agnes. Emerentiana was a catechumen still learning about Christianity before being officially baptized. Catholics believe martyrs are "baptized by blood," and otherwise go to heaven.. A few days prior to the death of St. Agnes she was found weeping on her tomb and praying by her tomb; upset upon the death of her best friend and foster sister, she claimed that she was a Christian as well and belittled the pagans who had killed Agnes, and was stoned to death by the crowd.

PRAYER
Lord may we love and venerate your beloved daughter Saint Emerentiana,
and may all who are in formation to recieve a sacrament, may their prayers unite with hers so that they may worship you forever.AMEN.
Read more