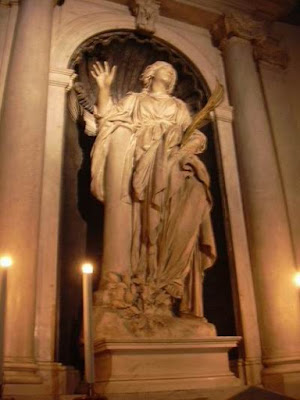 In later times a legend sprang up concerning her, connected with the Acts of the martyrdom of Saints John and Paul and has no historical claim to belief. According to this legend, Bibiana was the daughter of a former prefect, Flavianus, who was banished by Julian the Apostate. Dafrosa, the wife of Flavianus, and his two daughters, Demetria and Bibiana, were also persecuted by Julian. Dafrosa and Demetria died a natural death and were buried by Bibiana in their own house; but Bibiana was tortured and died as a result of her sufferings. Two days after her death a priest named John buried Bibiana near her mother and sister in her home, the house being later turned into a church. It is evident that the legend seeks to explain in this way the origin of the church and the presence in it of the bodies of the above mentioned confessors. The account contained in the martyrologies of the ninth century is drawn from the legend.

An alternate account says that in the year 363, Emperor Julian made Apronianus Governor of Rome. Bibiana suffered in the persecution started by him. She was the daughter of Christians, Flavian, a Roman knight, and Dafrosa, his wife. Flavian was tortured and sent into exile, where he died of his wounds. Dafrosa was beheaded, and their two daughters, Bibiana and Demetria, were stripped of their possessions and left to suffer poverty. However, they remained in their house, spending their time in fasting and prayer. Apronianus, seeing that hunger and want had no effect upon them, summoned them. Demetria, after confessing her faith, fell dead at the feet of the tyrant. Bibiana was reserved for greater sufferings. She was placed in the hands of a wicked woman called Rufina, who in vain endeavored to seduce her. She used blows as well as persuasion, but the Christian virgin remained faithful. Enraged at the constancy of this saintly virgin, Apronianus ordered her to be tied to a pillar and beaten with scourges, laden with lead plummets, until she expired. The saint endured the torments with joy, and died under the blows inflicted by the hands of the executioner.Her body was then put in the open air to be torn apart by wild animals, yet none would touch it. After two days she was buried.

PRAYER
O God, the Giver of all good gifts, Who in Thy handmaid Bibiana didst to the flower of virginity join the palm of martyrdom: do Thou, through her intercession so unite our minds in the bond of charity to Thee, that all dangers being done away, we may obtain everlasting rewards. Through our Lord Jesus Christ, Thy Son Who liveth and reigneth with Thee in the unity of the Holy Ghost, world without end.
AMEN.
December 2 martyr martyrdom persecution Sainthood. St. Bibiana