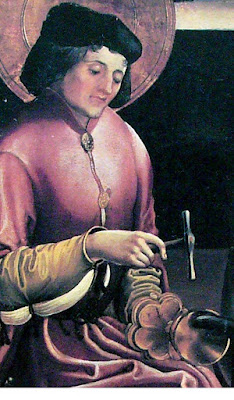 The son of Eucherius and Terrigia seems that since the beginning of its existence was under the sign of divine predilection. So says the legend of his life. Awake intelligence and skillful in using their hands. Apprentice silversmith of before, that is, those who have to hammer the metal to get him out of the bowels the figure that the artist has in mind. Acquired such skill that King Clotaire II, Dagobert then his son and grandson Clovis II then held him as himself in court for work in precious metals naturally need the blue blood who live in palaces and have to solve social commitments , political and even military with their peers.
But what attracted wide attention of these major Gallic country was not only his art. That was the starting point. Then it was the discovery of his entire personality deeply honored. A real man. Right-minded. Cristiano works more than name only. Pious and consistent in their loneliness in life. Cautious words and weighted at the trials. A rare subject in his day crammed with violence.
King Dagobert, considering the pros and cons, thought it was the right man to settle the dispute he had with former neighbor count of Brittany, sent him as a legacy and a good choice for the favorable results obtained. No wonder Eligio Eloy or happen to be in demand as a counselor of the Crown.
Besides his private prayers and sincere recognition of their unworthiness before God-like thing that dignified man, he learned to share with the needy the money he received for his work. Sponsored Solignac Abbey, at his expense were born in the Limousin and others in Paris, the church of San Pablo.
Not surprisingly, the death of the bishop of Noyon and Tournay, the sensitivity to want to have people carrying out this mission to Eloy and, less surprisingly, that King Clovis put all his influence to that cause. Almost had to force him to accept. Ordained a priest and then bishop, was devoted to his pastoral work with the best of efforts in the nineteen years that even the Lord gave him life. There were frequent pastoral visits, he was diligent in dealing with priests, it is exemplary discipline and government efforts to overcome the difficulties in extending the Gospel wherever sprouting pagan idolatry took root or the vices of the believing . Until he was present at the Council of Chalons-sur-Seine, the 644.
The architect of the noble metals and precious gems that got caught up on things idolatry perishable has been adopted as patron saint of blacksmiths. Hopefully those who regularly have their hands the jewels that know both men aspire to be attracted by goods that do not perish

PRAYER
Father you gave us the confessor and bishop
St. Eligius to be an example to
follow so we to can get closer to
our faith.
We ask this through Christ our lord.
AMEN