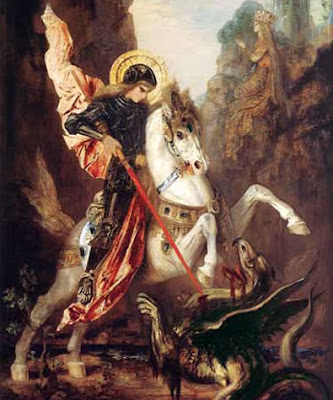 The life of St George is popular in Europe during the Middle Ages, thanks to a rather "sober" in their reporting.
According to legend, the saint was a Christian knight who seriously injured a swamp dragon that terrorized the inhabitants of a small town. The people seized with fear was about to flee, when St. George said he had only to believe in Jesus Christ for the dragon died. The king and his subjects became the point and the monster died.
By then broke the cruel persecution of Diocletian and Maximian, the saint then began to encourage those who hesitate in the faith, for which he received cruel punishment and torture, but all in vain.
The emperor ordered the beheading of the saint, a sentence that was carried out without difficulty, but when Diocletian returned from the execution site was consumed by fire down from heaven.
This popular version of the saint's life, which actually leads to St. George was truly a martyr Diospolis (ie Lydda) in Palestine, probably before the time of Constantine.
No one knows exactly how he became England's patron St. George. Certainly his name was already known in the British Isles before the Norman conquest.
In any case, it is likely that the Crusaders especially Ricardo I have returned from the east with a very high on the powerful intercession of St. George.He is one of the Fourteen Holy Helpers.He si the patron saint of England.

Prayer
Father may the life and death
of your martyr George help us
to love the name of Christ and
Mary our virgin mother.We ask
this through Christ our lord.
AMEN