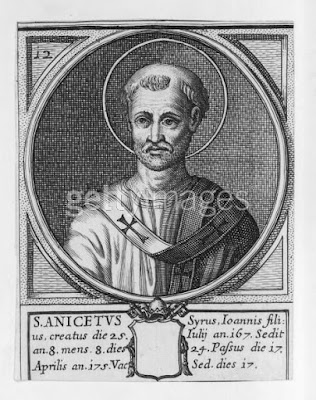 The information we have about his life are few. It is the tenth successor of St. Peter was pope from St. Pius I and Saint Sotero, ruled the Church by the time they last eleven years from 155 to 166 - and was a native of Emesa in Syria.
The circumstances under which worked are given by the social, political, economic and cultural life of the time. In the second century Greek was used as the language worship, the Popes are usually from poor families of the people elected for that service choice for martyrdom was (until the fourth century all popes gave their lives for the faith).
The care or service to the brothers had to be intense, self-sacrificing, courageous, generous and very demanding but full of goodness. The disciples of Jesus had increased every day still a precarious existence even in periods of peace. Even with the Antonines, death to the Christian could be behind any allegations or event, to the Stoic Marcus Aurelius believed that the patience of the Christian martyrs was fanaticism.
Had to strive to bring the pagan mystery, for the kingdom was also to give it to them. It was necessary to counteract the pagan ready thinking that with sarcasm, irony and slander, ridicule the spirit and life of Christians. So the faith was further apology.
A care out there to add the primary care of the flock with the problems that arise from within. Already swarming everywhere Christian faith versions that differed from the genuine model and had to be maintained at any cost the purity of the faith received. That was the situation of the complex system later called Gnosticism "are Christians and taught the secret knowledge of the divine, are influenced by Platonic and dualistic Persian religion, form cliques, they deny the atoning death of Jesus and reject the resurrection of earthly body.
Marcion was a gnostic, lived in Rome and the Pope Aniceto time, said there were two principles: the good was God and the evil spirit created the world, matter and the body was rich with shipping business, made havoc among Christians sowing confusion and denying the value of the body with extreme rigor.
In these life care Anicetus mused.
There was a peculiar case that deserves comment. Polycarp came to Rome with the Pope address a serious issue. He once was a direct disciple of St. John the Apostle young, and now is the bishop of Smyrna. With his eighty-five year-old wants to leave the date agreed upon the main Christian festival. Easterners are the Johannine tradition, while the West follow the tradition of Peter. They failed to agree. It is a question-that of the Pascua-it will take to be resolved until the Council of Nicea. But he fired in communion without breaking the unit or breaking charity Role Model!
There is no explicit and conclusive data on the location and means of transit. The Liber Pontificalis-although using an expression for the unusual, strange places him among the martyrs, then the constant tradition of the martyrologies speaks of martyrdom and marking the date 17 April, although not unanimous. With regard to the place of his burial, cemetery noted in St. Callistus, where often the popes were buried.
The relic of his head was delivered to the archbishop of Munich, Minucius, in 1590, and is venerated in the church governing the Jesuits in the city. The remains are buried in the sarcophagus which supports the main altar which enshrined the Cardinal Merry del Val in 1910 - the Spanish chapel of the Pontifical College in Rome, were transferred from the then Renaissance palace of the Dukes of Altemps, in the year 1604. Therefore, in the vault is painted, among many garlands and cherubs baroque, the apotheosis of Saint Anicetus, with layer deployed and ascending to heaven.