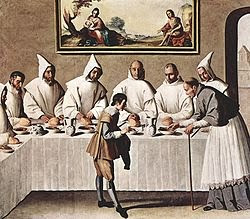 Born in Valence, on the banks of the Isar, in Dauphiné, in the year 1053. Almost everything in her life happens infrequently. His father Odilon, after fulfilling their patriotic duties, he retired with the consent of his wife at the Charterhouse and at the end of his days he received from his son's hand the last rites. So the son was educated exclusively by his mother.
Young still get the perk of a canonry and happy career in the church is promised by his friendship with the papal legate. As they see it is good and pious bishop to do twenty-seven very much against their will not be considered for the job qualities, and it seems that he was right, "but once set there was no remedy provided attributed their refusal to excessive humility. Grenoble consecrated him bishop to Pope Gregory VII in the year 1080, and coasted the Countess Matilde costs.
Arriving at his diocese in a state of depressing prevailing usury, are bought and sold church property (simony), clerical concubinage abound, the morality of the faithful is below the minimum with the examples of the clergy, and only debts is the mismanagement of the diocese. The scandal together is a fact. Hugo-between tears and prayers, "wants to turn around, but neither penances nor visits and calls for a rude people and rude take effect. After two years everything is in disorder and confusion. Finish the bishop go to the abbey of the Maison-Dieu in Clermont (Auvergne) and the habit of St. Benedict. But Pope sends exhaustively re-take the reins of his church in Grenoble.
Reluctantly obeys. Delivered to faithfully and dislike their sacred ministry. Health is not accompanying him and torment him devilish temptations inside. Needless to insist that the popes that follow relieve it of its obligations, and agree to appoint another bishop to resign. Erre que erre followed in the pit of taking forward the plot bishop of the Church under his shepherding. Mules sold his car to help the poor because there was no where to get food rooms or visit the diocese on foot along the roads, was present at councils and excommunicated the antipope Anacleto; received
Hugo de Grenoble, Saint
Pope Innocent II, who also declined to accept his resignation, he fled the schismatic Pedro de Lyon and helped eliminate the schism of France.
He helped St. Bruno and six companions to settle in the monastery that he was always a haven of peace and consolation happens frequently visit and live there as the most seasons of all the friars friar.
As he was faithful and God is good, it worked its work in Grenoble around more than half a century of work of a bishop. Clergy were reformed, customs changed, it ordered the nobles and the poor were hospital for the ills of body and peace of the souls. At the end of his life, tormented by temptations that led him to doubt the Divine Providence, who lost her memory ensure so far as to not recognize their friends, while maintaining clarity to what is referred to the good of souls. His life was exemplary for all, while, died April 1, 1132, was canonized only two years, the council held at Pisa, Pope Innocent.
Bishop had no vocation for ever, but it was sincere, honest at work, pious, and obedient. The strength of God is like. It is a model of bishops and the holiest of all time.

Prayer
Father almighty help us
during this Year of The Priests
so we all have a very religious
and holy life.
We ask this through Christ our lord.
AMEN