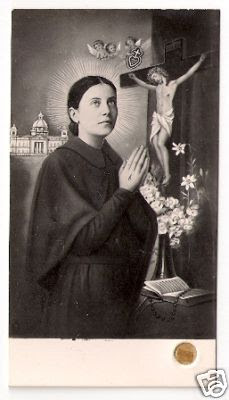 The history of this holy, so close to us by the time (1878-1903) and the customs of everyday life, is incredible things for the mystical phenomena which he starred.
In certain periods of his tormented life endured harassment of any kind. The devil appeared to her to under the figure of the confessor to suggest obscenities. Other times he appeared as a bright angel, when she was unmasked, disappeared into a red flame on the ground leaving a trail of ashes. Sometimes he beat her and left her lifeless on the floor, where their faces were swollen and dislocated bones.
But often encouraged the company of Christ, the Virgin and her guardian angel. So she narrated, for obedience, the events preceding the mysterious phenomenon of stigmata: "It was the night of June 8, 1899, when suddenly I feel a pain inside of my sins ... Jesus appeared with all the open wounds, but could not get those wounds and blood, but that came about as flames of fire, which came to touch my hands, my feet and my heart. I thought to die ...".
The wounds that were opened appeared each week of eight Thursday night until three in the afternoon of Friday, accompanied with ecstasy. Given these mysterious phenomena, which were soon cause for curiosity of neighbors Gema Lucca where he lived, people began to call her "the girl of grace." It was a little girl grown rapidly and matured by the experience of pain.
She was the daughter of a pharmacist in the province of Lucca, and when he was eight years old he lost her mother. Care of her seven siblings. A few years later the father died and she was miraculously healed from a serious illness that tormented her, asked to enter the convent, but her request was rejected. She was received at the home of Matthew Giannini gentleman, and there was a very retired life, calm and obedient to the directives of the spiritual father of the Passionist Sisters who cared for her. Under the modest dress gloves and concealed the evidence of their participation in the passion of Christ.
Meanwhile, the manifestations of her holiness had passed the limits of the district and the city. Many who had gone home out of curiosity, out transformed into her spirit. The bone disease that had attacked the very young reappeared and made her suffer terribly. She realized that his ordeal was ending. But in her humility did not believe they have paid enough with the coin from suffering the privilege of being associated with the passion of Christ.
She died at age 25 on 11 April 1903. was the morning of Holy Saturday.
Due canonized by S.S. Pius II on May 2, 1940, her canonization faced strong opposition from those who wished to avoid it Diara attention to her visions and stigmata.

Prayer
Eternal and al knowing God
may the life of your servant Gemma
help us have a great devotion to the Passion
of Christ so we can get closer to your Holy Catholic
Church and The Kingdom of Heaven.
AMEN