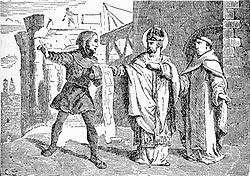 Saint Paternus of Avranches in Normandy (c. 482-565) was born around the year 482, although the exact year is unknown, in Poitiers, Poitou. He was born into a Christian family. His father Patranus went to Ireland to spend his days as a hermit in holy solitude. Because of this, Paternus embraced religious life. He became a monk at the Abbey of Marnes in France. Later on, St Paternus went to Wales where he built a monastery called Llanpatenvaur.Before long, he wished to attain the perfection of Christian virtue by a life of penance in solitude. He went into solitude with his fellow monk, Saint Scubilion. The forest of Seicy in the diocese of Coutances was the place he became a hermit.
At a later date, the abbot of the region who knew Paternus recommended him to the Bishop of Coutances and the bishop made him a priest in 512. Together with St Scubilion he evangelized the western coasts and established several monasteries of which he was made the abbot general.

Prayer
Father may we follow the life
of Paternus so we two can
embrace the religious life
like he did.
AMEN