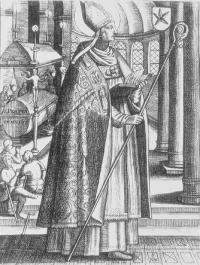 Saint Perpetuus was the eighth Bishop of Tours, who governed that see for more than thirty years, from 461 to 494. During all that time he labored by zealous sermons, many synods and wholesome regulations, to lead souls to virtue.
Saint Perpetuus had great veneration for the Saints and respect for their relics; he adorned their shrines and enriched their churches. As there was a continual succession of miracles at the tomb of Saint Martin, Perpetuus, finding the church built by Saint Bricius too small for the concourse of people coming there, directed its enlargement. When the building was finished, the good bishop solemnized the dedication of this large new church, which a writer of that time said was one of the marvels of the world and worthy to be compared with the temple of Solomon. The translation of the body of Saint Martin was carried out on the 4th of July in 491. It is believed that either Saint Martin or his Angel assisted on this occasion, for the coffin was so heavy that no means were found to move it, until an unknown elderly gentleman came forward and offered his aid, immediately efficacious.
Saint Perpetuus had made and signed his last will, which is still extant, on the 1st of March, 475, a number of years before his death. In this testament of love, he remited all debts owing to him; and having bequeathed to his church his library and several farms, and establishing a fund for the maintenance of lamps and the purchase of sacred vessels, he declared the poor his heirs for all the rest. He added exhortations to concord and piety, and begged a remembrance in prayer. His ancient epitaph equals him to the great Saint Martin. He died on the 8th of April, 494.
Bishop Bishop of Tours Eighth Bishop of Tours St. Perpetuus