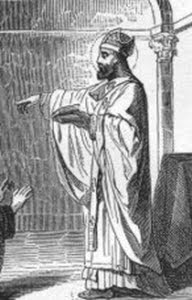 At the end of the twelfth century is born Richard, Wyche, a family of farm workers. Bump permanent austerity and harshness of life in the style of the greats of his time. The bishops are "lords" and loving human care, the monks abound in prosperity and luxury, the nobles are ambitious and on the throne is seen a flow strongly royalist. The lower class of people is poor and is steeped in ignorance and superstition. Richard is energetic and uncompromising when dealing with matters in which is present injustice, immorality or greed.
Possibly the natural condition it is what leads to a distancing, if not rejection of the powerful. The fact is that austerity lived in the house of his parents when he was child-must prepare for the mission to be played as an adult.
March to study at Oxford where he has good teachers Franciscans and Dominicans, and as more resources are not stretched, starved and cold. A short stay in Paris and returned to Oxford, graduating in Arts. In Bologna learns fees for seven years, doing what we would today call a law degree. When you return to Oxford he was appointed Chancellor of the University, Chancellor of the Archbishop of Canterbury and Lincoln, where he was a bishop his old friend and teacher Grosseteste. Teaches in Orleans for two years and there became a priest.
The Archbishop of Canterbury is appointed by the Bishop of Chichester, on the death of Bishop Ralph Neville. And here begins a period of difficulties and of strong evidence.
King Henry III, who takes hold in a system of ecclesiastical vacancies, is strongly opposed to this choice. In addition, preferred for the free seat Robert Passelewe for reasons of "the royal treasury." Pope Innocent IV Speaker who is presiding at this time the Council of Lyon, confirming the appointment of Richard and consecrating him personally, March 5, 1245. But this makes things worse. And is that the high prestige acquired by the papacy since the ninth century has greatly diminished from that sank the House of Hohenstaufen and popes have leaned toward France, the rivalry between England and France leads to rebound against Rome that reactions manifested in a strong English nationalism, the strength of the throne to accept the decisions of the pope and intransigence and interference in the mixed materials. Even the papal legates are unwelcome, if not ignored in the English court.
In these circumstances, the appointment of Ricardo has fallen humanity, at the wrong time. The king has commanded physically shut the doors of the episcopal palace and forbidden to shelter and money. People's fear of retribution leads to real see-Bishop Richard bum as his lawful diocese, making missionary bishop, traveling on foot and devoid of service. Must be a curious picture at the time that the bishops were "lords" and never worked without entourage. Visit the homes of the fishermen and the humble catechizes who share food. Any scandal for senior churchmen who like ostentation and monks who enjoy good food! Condemns the abuse of power and the vices of the time with extraordinary energy has a special way the right-ditch defense against arbitrariness and abuse of power, preached the Gospel teaching against nepotism prevailed.
They were eight years as bishop in that knew how to keep, with strength, free from pressures. In fact, no one can explain how it was possible to again and again to his council in taking forward the Constitutions which are of that era, and sets out ways to do next, pointing to a different pastoral praxis and more responsive to Gospel principles.
He died at the home-seekers - "Mas-Dieu" - for poor priests and pilgrims, at age 55.

Prayer
Father may the life of Richard
your bishop hlep us a holy life
like him so we too can become
Saints.
AMEN