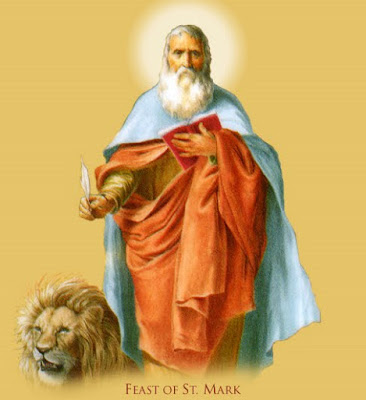 Patron of lawyers, notaries, stained glass artists, captives of Egypt, Venice, against impenitence and insect bites.
St. Mark is a Jew from Jerusalem, accompanied St. Paul and St. Barnabas, his cousin, to Antioch in the first such mission trip (Acts 12, 25), also accompanied Paul to Rome. He left them at Perga and returned to his home. (Acts 13:13). We do not know the reasons for this separation but if we know that later caused a separation between St. Paul and St. Barnabas, when St. Paul refused to accept St. Mark. St. Barnabas was so angry that he broke his missionary association with St. Paul and went to Cyprus with Mark (Acts 15.36-39). Years later, St. Paul and St. Mark returned to join in a mission trip.
He was a disciple of St. Peter and interpreter of it in his Gospel, the second canonical Gospel (the first written). St. Mark wrote in Greek in simple and strong. In their terminology is understood that his audience was Christian. His gospel contains history and theology. Debate is the date on which he wrote, was perhaps in the decade from 1960 to 1970 AD.
Together with Peter went to Rome. St. Peter for his part was to St. Mark as "my son" (1 Pet 5:13).
Sometimes called the New Testament John Mark (Acts 12:12).
Evangelized and established the church in Alexandria, and founded there the famous Christian school.
Died a martyr approx. on April 25, 1968 CE in Alexandria and his relics are in the famous cathedral of Venice.
Its symbol is the winged lion.

Prayer
Father may the life of
St. Mark help us proclaim
the word of the lord to the rest
of the world like he did.
We ask this through Christ our
Lord.
AMEN