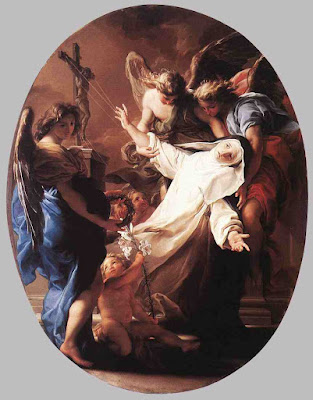 What a marvelous life of Saint Catherine of Siena is not unusual for both the role played in the history of his time, but how exquisitely feminine with what worked. The Pope, whom she called by the name of "sweet Christ on earth," he complained the little courage and invited him to leave Avignon and return to Rome, with most human words as these: "Courage, manfully, Father! I tell him not to be shaking. " A young man who sentenced to death and had accompanied her to the scaffold, he said at the last moment "to weddings, sweet my brother! soon you'll be in the long life. "
But the voice of submissive women changed in tone and often resulted in that "I want" that brooked no misrepresentations when it came into play the good of the Church and harmony among citizens.
Catherine was born in Siena (Italy) on March 25, 1347 and was the twenty-fourth daughter of James and Lapa Benincasa. At seven years held its mystical marriage with Christ. This was not due to childhood fantasies, but was the
Catherine of Siena, Saint
beginning of an extraordinary mystical experience, as seen later. At fifteen he entered the Third Order of St. Dominic, beginning a very strict life of penance. To overcome the reluctance to a stinking leper, bent and kissed the sores.
As he could not read or write, he began to say his letters to several secretaries, and wise afflicted, addressed to popes, kings, chiefs and humble folk. His bold social and political perplexities raised not a few among his own superiors and had to appear before the general chapter of the Dominicans, held in Florence in May 1377 to explain his conduct.
In Siena, in the seclusion of his cell, gave the "Dialogue on Divine Providence" to pay tribute to God her last love song. At the beginning of the great schism accepted the call of Urban VI to go to Rome. Here he became ill and died surrounded by his many disciples who recommended them to love each other. It was April 29, 1380: a month ago that it had met 33 years.
He was canonized on April 29, 1461. In 1939 he was declared patron saint of Italy with St. Francis of Assisi, and October 4, 1970 Paul VI proclaimed Doctor of the Church, and the October 1, 1999 Pope John Paul II declared her patroness of Europe.
Also Saint Catherine is patroness of against the fires, against bodily ills, against the disease, against the miscarriages, against temptations, Allentown, Pennsylvania, for fire prevention, of the fire, of the nurses, of people ridiculed for their piety, and of the sick. She is an inncorruptable.

Prayer
Father may the life of your
holy daughter Catherine be an
example of a life we Christians
can live by every day.
AMEN