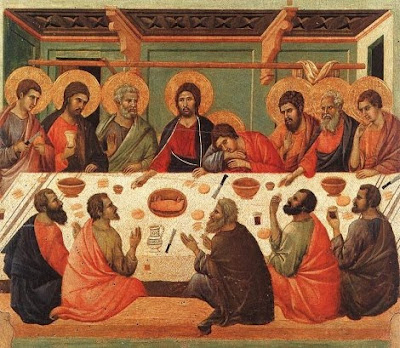 The feast of Maundy (or Holy) Thursday solemnly commemorates the institution of the Eucharist and is the oldest of the observances peculiar to Holy Week. In Rome various accessory ceremonies were early added to this commemoration, namely the consecration of the holy oils and the reconciliation of penitents, ceremonies obviously practical in character and readily explained by the proximity of the Christian Easter and the necessity of preparing for it. Holy Thursday could not but be a day of liturgical reunion since, in the cycle of movable feasts, it brings around the anniversary of the institution of the Liturgy. On that day, whilst the preparation of candidates was being completed, the Church celebrated the Missa chrismalis of which we have already described the rite and, moreover, proceeded to the reconciliation of penitents. In Rome everything was carried on in daylight, whereas in Africa on Holy Thursday the Eucharist was celebrated after the evening meal, in view of more exact conformity with the circumstances of the Last Supper. Canon 24 of the Council of Carthage dispenses the faithful from fast before communion on Holy Thursday, because, on that day, it was customary take a bath, and the bath and fast were considered incompatible. St. Augustine, too, speaks of this custom, he even says that as certain persons did not fast on that day, the oblation was made twice, morning and evening, and in this way those who did not observe the fast could partake of the Eucharist after the morning meal, whilst those who fasted awaited the evening repast.
Holy Thursday was taken up with a succession of ceremonies of a joyful character. the reconciliation of penitents, the consecration of the holy oils, the washing of the feet, and commemoration of the Blessed Eucharist, and because of all these ceremonies, the day received different names, all of which allude to one or another of solemnities.
April 1 Easter Tridium Holy Thursday Holy Week Institution of the Blessed Sacrament Jesus Christ last supper Maundy Thursday.