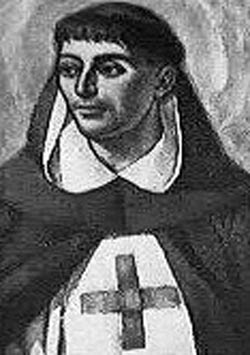 Michael decided at age six that he wanted to be a monk. Imposed such austerities on himself as a child that he had to be restrained. Orphaned, he became the apprentice of a merchant. Tried to join the Trinitarian monastery at Barcelona at age 12. Took his vows at age 15 at the monastery of Saint Lambert at Saragossa on 5 September 1607. Later felt drawn to the more austere Discalced Trinitarians; began his novitiate at Madrid, studied in Seville and Salamanca and took vows at Alcalá. Priest. Twice elected superior of the monastery at Valladolid. Lived a life of prayer and great mortification; especially devout towards the Holy Eucharist, and is said to have been rapt in ecstasy several times during Consecration. He was considered by his brothers to be a saint in life.
adoration of the blessed sacrament April 10. Barcelona Catalan saint Catalonia divine ecstasy friars Saint Michael de Sanctis