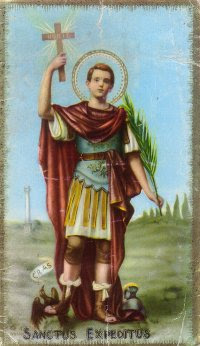 St. Expeditus was commander of a Roman legion and as such defended the Empire against the invasions of the barbarians. By becoming a Christian was martyred (possibly by the Emperor Diocletian) in Melitene, Armenia (now Malatya, Turkey). Along with him died his comrades in arms: Caio, Galatians, Hermogenes, and Rufus Aristonicus. Many other martyrs gave glory to God in his time, including St. Philomena and St. George.
According to tradition, at the time of conversion, the devil came to him in the form of a crow shouted "cras, cras cras" (in Latin means "Tomorrow, Tomorrow, Tomorrow"). So trying to persuade him to leave his decision later as the devil knows that what is left for tomorrow is much chance of that is undone. But the raven tempting crushed Expedito promptly saying "Hodi, Hodi, Hodi!" (TODAY, TODAY, TODAY). Do not leave anything for tomorrow, from today I will be Christian. "Thus he became a soldier of Christ, since that time using his courage and discipline to the Kingdom of God.
Although his name unknown origin, appears in the Roman Martyrology with Hermogenes and colleagues. His name is synonymous with promptly and is held by many and soon intercessor.
A St. Expeditus invoked in urgent problems. We know that the most important is to renounce sin and decide life fully for Christ. Let us be inspired by their readiness for and value to follow Christ in such difficult circumstances when Christians were persecuted to death. We also say "TODAY" Jesus and crush the deceptions of the tempter.
He is also venerated as the protector of youth, students, patients, family and work problems, and trials.
It is alleged that the saint appears as a clerk error when, in the nineteenth century, a box of relics was sent to French nuns with the notation: "issue." Sheppard (1969). But this hypothesis can not be true because St. Expeditus was known in the eighteenth century
St. Expeditus
in Germany and Sicily and was invoked in cases of emergency (Attwater).
In the iconography, St. Expeditus is depicted as a soldier with a cross on which is written "Hodi" (Today) and the martyr palm . At his feet is a crow and the word "cras" (tomorrow).
Although not shown in the current liturgical calendar continues to be a saint recognized by the Church.

Prayer
Father may the life of your martyr
St. Expeditus help us love the
name of Jesus and the Virgin Mary
so much that we can die defending the
the Holiness of Jesus Christ,the Virgin Mary,
the Blessed Sacrament,and The Holy Catholic
church.
AMEN