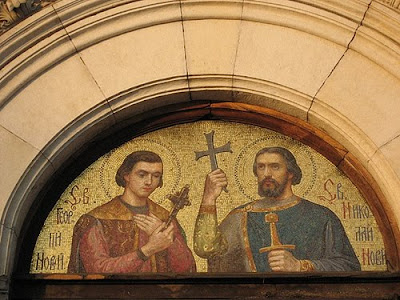 Saints Epipodius and Alexander, are venerated as Christian saints. Their feast day is 22 April. Epipodius was a native of Lyon; Alexander was said to be a native of Phrygia, and a physician by profession. They were both martyred during the reign of Marcus Aurelius. Epipodius and Alexander are said to have been close friends since childhood. Epipodius is said to have been a confirmed celibate bachelor, though he never joined a religious order. He devoted his time to Christian works and was betrayed to imperial authorities by a servant. Both men were subsequently imprisoned, tortured, and condemned to be devoured by wild beasts in the amphitheatre, and died "neither uttering a groan nor a syllable, but conversing in their heart with God."
April 22. celibate bachelors France Lyon martyrs Saints Epipodius and Alexander