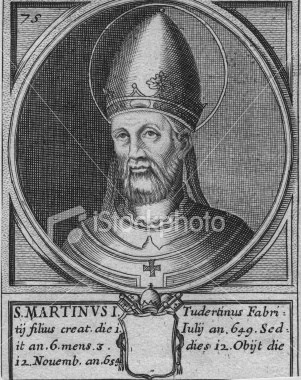 A native of Todi and deacon of the Roman Church, Martin was elected pope to succeed Pope Theodore, who died on May 13, 649. Immediately demonstrated very strongly in the conduct of the Church. Indeed, no consent asked or hoped for election by the emperor Constans II had issued a year before the type, a document in defense of the thesis of the Monothelites heretical. To stop the spread of this heresy, three months after his election, Pope Martin convened at the Lateran Basilica a great council, to which were invited all the bishops of the West.
The condemnation of all pleadings Monothelites, solemnly declared in the five sessions the council, raised the furious reaction of the Byzantine court. The emperor ordered the Exarch of Ravenna, Olimpio, who was arrested in Rome and the Pope. Olimpio proposed not only meet the imperial orders, but tried to assassinate the Pope by a gunman during the celebration of Mass at Santa Maria Maggiore.
At the time of receiving the Host in the hands of the Pontiff, the vile assassin drew his dagger, but at that moment was suddenly blind.
Maybe this fact Olimpio persuaded to change their attitude and to be reconciled with the Holy Pontiff and project an armed struggle against Constantinople. In the 653, Olimpio died of plague, the Emperor was able to carry out his revenge by making arrest the Pope through the new Exarch of Ravenna, Theodore Calliope.
Martin, accused of having illegally seized the papal senior and having engineered with Olimpio against Constantinople was taken by sea to the city on the Bosporus. The long journey, which lasted fifteen months, was the beginning of a cruel martyrdom. During the many scales were not allowed any of the faithful who came out to greet the pope who would approach him. The prisoner was not given even water for bathing. The September 17, 654 reached Constantinople, was placed on a stretcher and exposed for an entire
I Martin, Saint
days to the insults of the people, and then locked up for three months in jail Prandiaria. Then began a long and exhausting process, during which the seditious were such that the accused did mutter, "Do with me what you want, any kind of death will be a good for me."
Publicly degraded, naked and exposed to the rigors of cold chains, was put in a cell reserved for those condemned to death. On 26 March 655 did secretly from exile in the Crimea. He suffered hunger and neglect suffered in the most absolute for four months, until death came, exhausted in body but not in the will, on 16 September 655.

Prayer
Father may the life anf martyrdom
of Martin I help us love Jesus
so much we can give our life defending
his holy name.
AMEN