Our Lady of Good Counsel 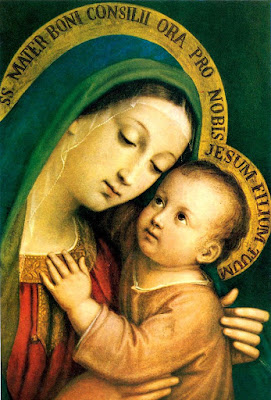 The story of how the miraculous fresco of Our Lady of Good Counsel left Albania and traveled to Italy is one that is marvelous and true. There is a little town, about 25 miles outside of Rome, called Genazzano. In pagan times it was a celebrated shrine for the worship of Venus, but in the fourth century a church was built there in honor of Our Lady and called the Church of the Virgin Mother of Good Counsel. Through the course of time the church was abandoned and almost fell into ruins. So it remained until the mid 15th century when a pious woman gave all she had for its restoration.

This story is about that pious woman, who in many ways is a symbol for our times. Most of the time her name is lost in the marvel of the facts of the story. She is simply recorded as a pious widow, a tertiary of the Order of St. Augustine, and perhaps she would have it that way. But it seems to me that the story and the miracle of image of Our Lady of Good Counsel of Genazzano is in a special way her story, and her name should not be lost to history.

In 1436 Petruccia Noteria had been left a widow with respectable means. Living alone, for she had no children, she dedicated herself to prayer. Her special concern was the deplorable state of the Church of Our Lady of Good Counsel because she had been favored with a vision in which the Virgin Mary entrusted her with the mission of restoring this church. Petruccia invoked the good will of the townspeople to assist in the work, but they proved unwilling. The strong walls of the small fortressed city had not been able to protect its inhabitants from the spirit of the Renaissance, with its love of luxury and comfort, from corrupting the customs and vanquishing the faith of its inhabitants. Convinced of her mission and confident that Our Lady would provide the means for her to accomplish what had been asked of her, Petruccia donated all her goods to pay for the restoration of the sacred building with the hope that others would join her in the pious undertaking as they saw it being realized. The work began and the rough beam walls of a side chapel were raised. But no noble souls joined in the enterprise. Instead Petruccia met with scorn and ridicule. Even some who formerly had called themselves her friends now reprimanded or laughed at her in public: “What imprudence! And at her age!” “Who does she think she is – another St. Francis?” “She must be mad! Who needs another church? The times have changed. The crazy visionary needs to wake up and see that the past is gone.”
April 26 Mary Mother of Christ Mother of God. Our Lady of Good Counsel Virgin Mary