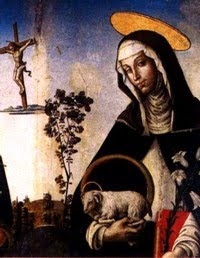 Agnes was born into a noble family in Gracciano, a small village near Montepulciano in Tuscany, Italy where, at the age of nine, she entered the monastery (or convent).
in 1281, the administration of the castle of Proceno, a fief of Orvieto, invited the nuns of Montepulciano to send some of their sisters to Proceno to found a new convent. Agnes was among the sisters at the new convent.
In 1288 Agnes, despite her youth at 20 years of age, was selected as prioress. There she gained a reputation for performing miracles: people suffering from mental and physical ailments seemed cured by her presence. She was reported to have "multiplied loaves", creating many from a few on numerous occasions, recalling the Gospel miracle of the loaves and fishes.
Later about 1306, Agnes established a convent of Dominican nuns in Gracciano. She presided over this convent until her death. After her death, her body was said to remain incorrupt rather than decomposing. It was reported that a perfumed liquid flowed from her hands and feet.
Raimondo da Capua, confessor to Saint Catherine of Siena, wrote an account of Agnese some fifty years later; Catherine referred to her as "Our mother, the glorious Agnes."
April 20. Dominican dominican nun incorruptable incorruptables St. Agnes of Montepulciano