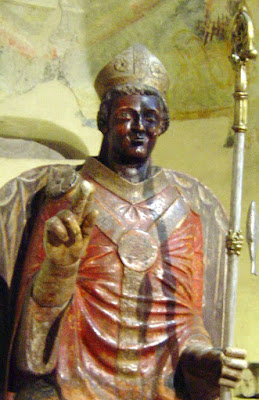 at the same time that the Tiber overflowed a considerable quarter of Rome, and the flood over-topped the walls, the waters of the Adige, which fails from the mountains with excessive rapidity, threatened to drown great part of the city of Verona. The people flocked in crowds to the church of their holy patron Zeno: the waters seemed to respect its doors, they gradually swelled as high as the windows! yet the flood never broke into the church, but stood like a firm wall, as when the Israelites passed the Jordan; and the people remained there twenty-foul hours in prayer, till the water subsided within the banks of the channel This prodigy had as many witnesses as there were inhabitants of Verona. The devotion of the people to St. Zeno was much increased by this and other miracles; and, in the reign of Pepin, king of Italy, son of Charlemagne, and brother of Louis Debonnaire, Rotaldus, bishop of Verona, translated his relics into a new spacious church, built under his invocation in 865, whore they are kept with singular veneration in a subterraneous chapel.
St. Zeno is chiefly known to us by his sufferings for the faith. Persecutions and humiliations for Christ are not a chastisement, but a recompense, and the portion of his most faithful servants. Happy are they who know their value, and bear them at least with patience and resignation; but more happy they who, with the martyrs and all the saints, suffer them with a holy joy and exultation. From his own feeling sentiments, and perfect practice of patience, St. Zeno composed his excellent sermon on that virtue, which he closes with this pathetic prayer and eulogium: "How earnestly do I desire, if I were able, to celebrate thee, O Patience, queen of all things! but by my life and manners more than by my words. For thou restest in thy own action and council more than in discourses, and in perfecting rather than in multiplying virtues. Thou art the support of virginity, the secure harbor of widowhood, the guide and directress of the married state, the unanimity of friendship, the comfort and joy of slavery, to which thou art often liberty. By thee, poverty enjoys all, because, content with itself, it bears all. By thee, the prophets were advanced in virtue, and the apostles united to Christ. Thou art the daily crown and mother of the martyrs. Thou art the bulwark of faith, the fruit of hope, and the friend of charity. Thou conductest all the people and all divine virtues, and dishevelled hairs bound up into one knot, for ornament and honor. Happy, eternally happy, is he who shall always possess thee in his soul." In the following discourse, he speaks no less pathetically on humility: but surpasses himself in his sermon or charity, or divine love. "O Charity! how tender, how rich, how powerful art thou! He who possesseth not thee, hath nothing. Thou couldst change God into man. Thou hast overcome death, by teaching a God to die"
angler April 12. Bishop of Verona fisherman Italian Bishops Italy martyr. protector of newborns St. Zeno of Verona Verona