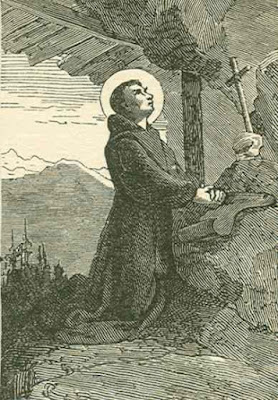 He was born into a noble family of Vercelli in north-west Italy and brought up by a relation after the death of his parents. He undertook a pilgrimage to Santiago de Compostela. Catholic tradition states that on his pilgrimage to Compostela, William encircled his body with iron bands to increase his suffering.
He then lived as a hermit on the summit of Monte Vergine (then known as Monte Vergiliana) between Nola and Benevento. Here he attracted a number of followers and founded the Monastery of Montevergine.

While at Montevergine, William of Vercelli is stated as having performed miracles. Roger I of Sicily served as a patron to William, who founded many monasteries for men and women in Sicily. The Catholic Encyclopedia states that Roger built a monastery opposite his palace at Salerno in order to have William always near him.