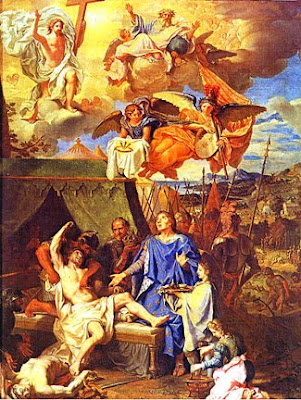 Clotilde, daughter of Burgundian Chilperic Carétène and Christian, born around 474, probably in Lyons, she was raised in the practice of virtue and veneration of the martyrs of Lyon, Saint Blandina especially. When, around 490, Chilperic died she had to tutor her uncle Godegisil, King Geneva.

Sought in marriage by the Frankish king, Clovis, still pagan, who wanted to find allies against the Burgundians, the Visigoths, under this condition she agreed that children born of their union would be raised in the Catholic faith. The marriage was celebrated in Soissons with the pomp of barbaric customs: the great concern of Clotilde, from that moment, was the conversion of her husband. The work must be slow, it could seriously fear that if Clovis was a Christian, he immediately fell into Arianism. The auxiliary was sent by Providence Remi, bishop of Rheims, who had won the good graces of the barbarian king, congratulating him on his accession to the throne. The birth of her first child was for Clotilde a source of pain: she had got to be baptized, but it was to see him die soon after, hence the criticism of the monarch "It is your God he said to Clotilde, Which is the cause of death of the child, if I had spent my own, he would be alive. The worthy wife, undismayed, agreed to the test with resignation, and prayer, humble, eager obtained the cure of his second son fell ill after being baptized. In 496, the victory of Clovis over the Alamanni at Tolbiac, after he promised to receive baptism and to worship the God of Clotilde, came joy fill the heart of the queen without losing time, she sent to inform the Bishop Remi, who hastened to inform the prince, then to baptize in Reims, December 25 496.

This providential mission accomplished, Eunice went into the shade during the reign of Clovis. The queen looked after mainly the education of her four children and she lives ended in a fairly satisfactory control of Clovis against the Burgundians, she consulted with her husband for the construction of the church which was to be their Tomb on the Mount of Lutetia (later the Mount Sainte-Genevieve). Widowed after twenty years of marriage, she experienced years of mortal anguish. She had to part with her daughter Eunice and give her in marriage to the king of the Visigoths, Amalaric; Clodomir was killed in a battle against the Burgundians, and Clotaire Childebert treated as prisoners of Clodomir children and eventually murdered the first two while the the third escaped them that to be raised in a cloister. Amalaric abused by the young princess Clotilde was snatched from the hands of this tyrant to expire when she returned to France. Finally Childebert Clotaire and went into battle against each other and it was a miracle, due to the prayers of their mothers, to prevent a fratricidal struggle had disastrous results.

Penitent and resigned within the scope of many trials, Clotilde multiplied his pious foundations: she raised in Chelles near Paris, a women's monastery in honor of St. George, rebuilt and decorated the basilica housing the mortal remains of St. Germain Auxerre, Andelys founded a monastery that was the rival of one of Chelmsford, spent his last years in Tours where he had drawn his cult favorite for St. Martin and became the guardian of the tomb of this great bishop, miracle worker. There she died at seventy years, 3 June 545. His body was transported from Tours to Paris, the church of Mount Lutece, the people began to call the name of Sainte-Genevieve, was in its crypt the body of the queen, who had founded. There Clotilde was associated with honors Genevieve was the object.

But in the ninth century, the Norman invasion forced the Parisians to carry the shrine of St. Clotilde Castle Vivieres (Aisne). When the relics were returned to génovéfains of Paris, they left with Vivieres head and arm, and these were the origins of a cult of St. Clotilde remained popular in this area. In 1656, a coast, was ceded to the holy church of Our Lady of Andelys, always remained faithful to the worship of its founder. In 1793, the rage of revolutionary relentlessly against the shrine of St. Genevieve was reached with great difficulty to save the bones of Clotilde and put them in a safe place and these bones are preserved in the small parish church of Saint-Leu .
French Saints June 3 queen St. Clotilde of France