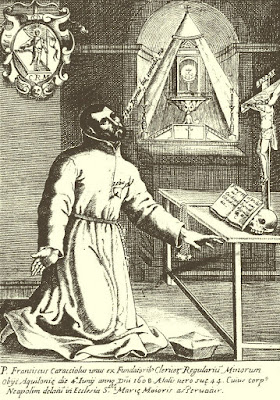 The temporal environment in which God wanted put into the world is just as new winds blowing in the Church after the Council of Trent. It opens in the lush baroque art and piety to the foundations leading to new forms and styles to virgins who attempt to reform all that fought Trento. Languishing on Renaissance Rome drunk up to make it dull and unable to discover the evils brewing and exploded with Luther. That's why new saints time: Pius V, Charles Borromeo, Ignatius of Loyola, Juan de Ribera, Teresa of Ávila, John of the Cross, Francis of Sales, Philip Neri, Francis Cariacciolo ... and goals. Popes, poets, teachers, bishops, writers and apostles to a new time-India-grown seriously trying to return to prayer, to flee the luxurious, the confessionals, worship the Eucharist and preaching witnessing poverty with attention to destitute and sick. The year 1563 was interpreted by one of the biographers of Francis Caracciolo as an omen, was when the Council of Trent ends and is also the year of his birth in the Abruzzo region, just in Villa Santa Maria, on October 13 , son of Francis and Elizabeth Caracciolo Baratuchi, is the second of five children and gave him the name of Ascanio. After attending the University's own time, Ascanio was military. But a disease diagnosed by doctors as leprosy will change the course of his life because of the danger of contagion friends have abandoned him, the loneliness and fear of death leads him to raise his eyes to heaven and, as usual In these limited cases, the time of the great promises: if cure of the disease, dedicated to God
Francis Caracciolo the rest of his days. And it was. Noblesse oblige. Healed, he went to Naples and calls for the admission to the brotherhood of the Bianchi, the Whites, which is engaged in providing charity care to the sick, not a few who are sentenced to galley and prisoners in prisons. The priest Adorno, another man with intimations of the divine and instrumental in the life of Caracciolo, has also requested admission into the brotherhood of the Whites. In the company of a third, also a relative of Ascanio and with the same name, will meet for forty days in the camandulenses Abbey, near Naples, to draw up the statutes of the foundation seeking to implement because they want to do something for Church. Sixtus V approved the new Order in Rome and the call of the "Clergy minors", besides the three vows of religious life common to add a fourth vow consists in the renunciation of ecclesiastical support. The shortlist of the founders is the first three partners. From the profession made in Naples, Ascanio and Francisco will be called. Soon they are joined by ten other priests, with the same desire for holiness and despise frontally honors, this quest for greatness has done much harm to the Church at the time of the Renaissance. Now are shared among all day to keep a continual fasting and distributed the hours of day and night to keep lifelong adoration of the Blessed Sacrament. We need to establish Philip II in Spain but does not give them facilities. King thinks there are too many monks in the Empire and has issued rules. Returning to Rome, they insist on trying, get further confirmation of Pope Gregory XVI to change the mood of Philip II. Now Adorno dies and is appointed General Francisco Caracciolo. Another attempt is in the Escorial, with better success, but there were storm of clerics in Madrid, with suspense. Pope Clement VIII intercede and come recommended from Rome and best times to King Philip III. In Valladolid got home and found a school set up Alcalá serve for the formation of his "Clerics Regular Minor." Followed by other foundations also in Rome and Naples. The strong performance reflects a continued desire the divine will which did not resist or even protest when the misunderstandings and entanglements of the men became apparent. Live humble and faithful to their commitment. Was always gentle with the sick and generous to the poor. Draws attention to the spirit of penance, fasting and mortification imposed upon himself. Asked leave to resign the government to engage in prayer and accepted, chose to live in the stairwell of the house since then is the only silent witness to their prayer and penance. The love of Jesus Christ was so great that sometimes it is enough to look at a crucifix into ecstasy and high thinking the Virgin Mary in the eyes brings tears of tenderness. When only 44 years old, died in Naples on June 4, 1608, with the names of Jesus and Mary in the mouth. Pope Pius VII canonized him in 1807. His body is preserved in the church of Santa Maria Maggiore in Naples and iconography shows a Custody Francisco Caracciolo in his hand, as a symbol of love that took to the Eucharist and to keep your order to be faithful to the end of time.