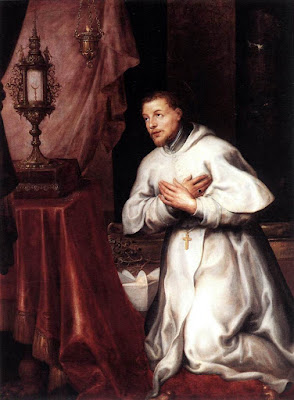 Norbert was born in Xanten (Germany) of the noble family of Gennep, towards 1080. As was the custom for every second child of the nobility, Norbert will follow the race was for military or ecclesiastical. He chose the latter path, not by vocation, but by simple chance. In fact, being a deacon could enjoy the many privileges to the side of the Great Elector of Cologne and the emperor Henry V, which nominated for an important episcopal see. But God had other plans. During a ride through the forest, a violent hurricane that struck him down from his horse and, like Saul on the road to Damascus, said: "Lord, what can I do?".

The response that radically changed his life unedifying was: "Abandon the path of evil and do good." That episode was the beginning of his conversion. Mundane places left and went to school in the Benedictine abbot of Siegburg and the canons of Klosterrath, then followed the example of the hermit Liudolfo spending three years in penance and prayer. In 1115 he was ordained by the archbishop of Cologne, and began his itinerant missionary activity.

He wanted to set an example by shedding all its assets and distribute to the poor. Retained for him a mule and ten pieces of silver, but later also left it and continued his travels on foot and barefoot. In France, near Nimes, met with Pope Calixtus II who encouraged him to continue along that path. The Bishop of Laon, to keep him in his diocese, proposed to be the guide of the Canons Regular who followed the Rule of St. Augustine, and who had been assigned Praemonstratum convent. Thus was born the Order of the Premonstratensians. Norbert meantime had continued its activity itinerant preacher.

Magdeburg was attending the funeral of the bishop of that city, when the popular clamor chose him as his successor. He was a bishop uncomfortable for many. Tough, good organizer, won applause and enmities. The Emperor Lothair appointed him chancellor of the empire for Italy and Pope Innocent II extended its jurisdiction to Poland. But Norbert not forget the monastic rule of poverty and the exercise of the apostolate among the humble people of the countryside, and lived fully the ideal of active and contemplative life of the Premonstratensians even in the heat of high office. He died in Magdeburg, returning from a peacekeeping mission in Italy, on June 6, 1134. He was canonized in 1582.