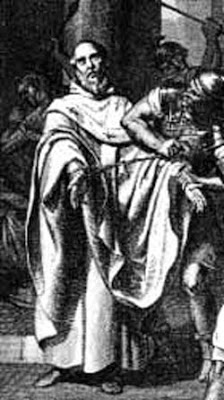 Peacemaker and actually name (the name " Irenaeus " in Greek means peaceful and calming ) , Saint Irenaeus was presented to the Pope by the Christians of Gaul with great words of praise: "Guardian of the will of Christ. " In Rome honored its name suggests moderation to Pope Victor , respectfully advising not excommunicate the churches of Asia that wanted to celebrate Easter on the same date as the otherChristian communities. With the same purpose this man Weighted peacekeepers insisted the bishops of other Christian communities to work for the triumph of concord and unity , especially clinging to apostolic tradition to combat Gnostic rationalism . From his writings are in fact the five books of Adversus haereses, in which Irenaeus appears not only as the most balanced and insightful theologian of the redemptive Incarnation , but also as one of the pastors more complete, more and more Catholic Apostolic have served the Church. One can see that his arguments against the heretics , though born of controversy , are the result of prayer and charity. Irenaeus was a native of Asia Minor. Among his memories of youth is in contact with Polycarp , the bishop saint " who was instructed by the eyewitnesses of the life of the Word " , especially by the apostle John, who had established his headquarters in Smyrna. Irenaeus, therefore , through Polycarp joins the Apostles. After leaving Asia Minor, going to Rome and continues to Lyon ( France). He belonged to the list of the martyrs of Lyon , victims of the persecution of 177, because at that time the Church had sent him to Rome to present the pope Eleuterio order some doctrinal issues , especially related to the error mountaineer . This error was caused by a group of fans who had come from East, preaching the distaste for the things of the world and announcing the imminent return of Christ. Back to Lyon , Irenaeus succeeded the martyr Bishop St. 178 Photinus , and governed the Church of Lyon until his death , about the year 200. Although not proven his martyrdom , the Church venerates him as a martyr. In any case, he was an authentic witness of faith in a period of severe persecution , its scope was very broad, taking into account that probably there was no other bishop in the Gaul or in the neighboring lands of Germany. Their language was Greek , but he learned the languages "barbaric "to evangelize these people.