First Martyrs of the Church of Rome 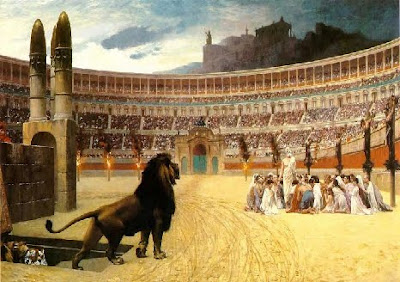 Many martyrs who suffered death under Emperor Nero . Owing to their executions during the reign of Emperor Nero, they are called the Neronian Martyrs, and they are also termed the Protomartyrs of Rome, being honored by the site in Vatican City called the Piazza of the Protomartyrs. These early Christians were disciples of the Apostles, and they endured hideous tortures and ghastly deaths following the burning of Rome in the infamous fire of 62.Their dignity in suffering, and their fervor to the end, did not provide Nero or the Romans with the public diversion desired. Instead, the faith was firmly planted in the Eternal City. This all that is known about these Martyrs.

Prayer
Father,
you sanctified the Church of Rome
with the blood of its first martyrs.
May we find strength from their courage
and rejoice in their triumph.
We ask this through Christ our Lord.
AMEN