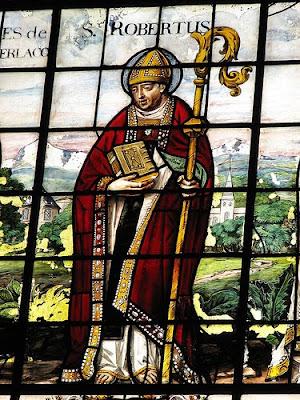 Saint Robert was born in the district of Craven, near Skipton in North Yorkshire, probably in the village of Gargrave. He studied at the University of Paris, where he is said to have composed a commentary - since lost - on the Psalms. He became a parish priest, returning to serve in his hometown of Gargrave, where he was made rector. He later became a Benedictine at Whitby, joining a band of monks from Saint Mary's Abbey in York. They established a monastery in the winter of 1132 in a valley near Skeldale, on land given them by Archbishop Thurston. The first two years were difficult, and the monks struggled in extreme poverty. Initially they lived in a makeshift structure on the banks of the River Skell. But despite the hardships, the monks were known for their holiness, austerity, and dedication to the strict Benedictine way of life. Eventually, their fame brought a new novice, Hugh, Dean of York, who relinquished all his wealth to the community, and allowed for the building of more suitable facilities. Because of the many natural springs in the area, the monastery was called Fountains Abbey. St Robert was described as a devout, prayerful, and gentle man. While he is known for being merciful in his judgment of others, and a warm and considerate campanion, he was also very zealous toward his own vows of poverty.

He received his abbot's permission to join the founders of the Cistercian monastery of Fountains. About 1138 he headed the first colony sent out from Fountains and established the Abbey of Newminster near the castle of Ralph de Merlay, at Morpeth in Northumberland. During his abbacy three colonies of monks were sent out to found new monasteries.

Capgrave's life tells that an accusation of misconduct was brought against him by his own monks: St Robert was said to have had an interest towards a woman of the village; so he went abroad to defend himself before St. Bernard. St Bernard did not doubt St Robert's innocence, since he had received a heavenly sign of his virtuous conduct. St Robert and St Bernard became friends, and St Bernard gave St Robert his belt, which is considered miraculous: it is said that many ill people have recovered just by touching it. Now, the belt is currently in Newminster.
Benedictine Monk confession Confessor England english saints June 7. St. Robert of Newminster