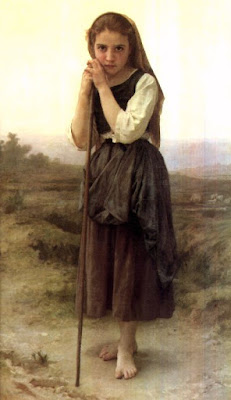 Saint Germaine Cousin is a French saint. She was born in 1579 of humble parents at Pibrac, a village about ten miles from Toulouse.

Of her, the Catholic Encyclopedia writes:

"From her birth she seemed marked out for suffering; she came into the world with a deformed hand and the disease of scrofula, and, while yet an infant, lost her mother. Her father soon married again, but his second wife treated Germaine with much cruelty. Under pretence of saving the other children from the contagion of scrofula she persuaded the father to keep Germaine away from the homestead, and thus the child was employed almost from infancy as a shepherdess. When she returned at night, her bed was in the stable or on a litter of vine branches in a garret. In this hard school Germaine learned early to practise humility and patience. She was gifted with a marvellous sense of the presence of God and of spiritual things, so that her lonely life became to her a source of light and blessing. To poverty, bodily infirmity, the rigours of the seasons, the lack of affection from those in her own home, she added voluntary mortifications and austerities, making bread and water her daily food. Her love for Jesus in the Blessed Sacrament and for His Virgin Mother presaged the saint. She assisted daily at the Holy Sacrifice; when the bell rang, she fixed her sheep-hook or distaff in the ground, and left her flocks to the care of Providence while she heard Mass. Although the pasture was on the border of a forest infested with wolves, no harm ever came to her flocks."

She is said to have practised many austerities as reparation for the sacrileges perpetrated by heretics in the neighbouring churches. She frequented the Sacraments of Penance and the Holy Eucharist, and it was observed that her piety increased on the approach of every feast of Our Lady. The Rosary was her only book, and her devotion to the Angelus was so great that she used to fall on her knees at the first sound of the bell, even though she heard it when crossing a stream. The villagers are said to have inclined at first to treat her piety with mild derision, until certain signs of God's signal favour made her an object of reverence and awe.

The ford in winter, after heavy rains or the melting of snow, was at times impassable. On several occasions the swollen waters were seen to open and afford her a passage without wetting her garments. Notwithstanding her poverty she found means to help the poor by sharing with them her allowance of bread. Her father at last came to a sense of his duty, forbade her stepmother henceforth to treat her harshly, and wished to give her a place in the home with his other children, but Germaine begged to be allowed to remain in the humbler position. At this point, when men were beginning to realize the beauty of her life, she died. One morning in the early summer of 1601, her father found that she had not risen at the usual hour and went to call her, finding her dead on her pallet of vine-twigs. She was 22 years old at the time.
child saints French Saints June 15. life of struggles sheperdress shepheard St. Germaine Cousin