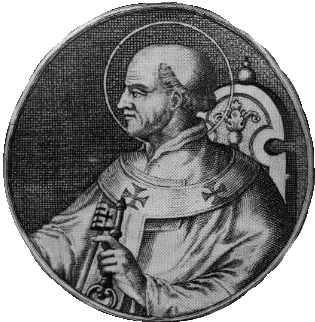 Dates of birth and death unknown. He was the son of Pope Hormisdas who had been married before becoming one of the highest clergy. Silverius entered the service of the Church and was subdeacon at Rome when the Pope Agapitus died in Constantinople on 22 April of the year 536.La Empress Theodora, who favored the Monophysite tried to induce the election as pope of the Roman deacon Vigilius who was then in Constantinople and had given the desired guarantees as to the Monophysite. However, Teodato, King of the Ostrogoths, who wanted to prevent the election of a pope connected to Constantinople, anticipate, and influence the subdeacon Silverio was chosen. The choice of a subdeacon as bishop of Rome was unusual. Consequently, it is easy to understand that, as the author of the first part of the life of Silverio in the "Liber Pontificalis" (ed. Duchesne, I, 210) recounts, appeared strong opposition among the clergy. This, however, was repressed by Teodato so finally, after Silverio had been consecrated bishop (probably on June 8, 536) all Roman priests gave their written consent to their elevation. The statement made by the author mentioned that Silverio said Teodato intervention by the payment of money is unjustifiable, and is explained by the hostile opinion of the author on the Pope and the Goths. The author of the second part of life in the "Liber Pontificalis" is favorably inclined to Silverio. The pontificate of this pope belongs to a period wildly unstable, and he himself fell victim to the intrigues of the Byzantine Court.

Silverius After the Pope had become Empress Theodora sought to win him over to the Monophysite. She especially wanted to have it entered into communion with the Monophysite Patriarch of Constantinople, Antimo, who had been excommunicated and deposed by Agapitus, and Severus of Antioch. However, the Pope in no way compromised and decided to overthrow Teodora now and win the papal seat Vigilio. Stormy weather arrived in Rome during the fight that broke out in Italy from the Ostrogoths and the Byzantines after the death of Amalasuntha, daughter of Theodoric the Great. King Ostrogoth Vitigio, who ascended the throne in August 536, besieged the city. The churches of the catacombs outside the city were destroyed, the very graves of the martyrs in the catacombs were opened and desecrated. In December, 536, the Byzantine general Belisarius fortified Rome and was received by the Pope in a courteous and friendly. Teodora Belisarius tried to use to carry out his plan to depose Silverio, and put in place the Roman deacon Vigilius (qv), formerly apocrisiarius in Constantinople, now gone to Italy. Antonina, wife of Belisarius influenced her husband to act as Teodora wanted. By means of a forged letter accused the Pope of an agreement with King Gothic treacherous besieging Rome. Silverio was alleged that the king had offered to leave one of the secret city gates open to allow the Goths to enter. Silverius was subsequently arrested in March of 537, violently taken from his episcopal dress, given the clothes of a monk and taken into exile to the east. Vigilio was consecrated Bishop of Rome in his place.

Silverius was born in Lycia where he was to reside at Patara. The Bishop of Patara soon discovered that the exiled Pope was innocent. He traveled to Constantinople and was able to put before the Emperor Justinian that evidence of innocence of the exiled Emperor Belisarius wrote to ordering a new investigation into the matter. If it turned out that the letter concerning the alleged plan for the Goths was false, Silverio should be placed once more in possession of the papal see. At the same time the emperor Silverio allowed to return to Italy, and soon entered the country, apparently in Naples. However, Vigilio managed to take over illegally deposed his predecessor. Obviously acted in accordance with the Empress Theodora and was helped by Antonina, the wife of Belisarius. Silverio was taken to the island of Palmaria in the Tyrrhenian Sea and kept in strict confinement. Here died of deprivation and harsh treatment he endured. The year of his death is unknown, but probably did not live long after arriving in Palmaria. He was buried on the island, according to the testimony of the "Liber Pontificalis" in June 1920, his remains were never removed from Palmaria. According to the witness himself, he was raised after his death by the faithful who visited his grave. In later times he was venerated as a saint. The earliest evidence of this is given by a list of saints of the eleventh century (Mélanges d'archéologie et d'histoire, 1893, 169). "Martyrologium" of Pedro de Natalibus century fourteen also contains his party, who is remembered in the present Roman Martyrology on 20 June.