Ss. Julitta and Cyriacus of Iconium 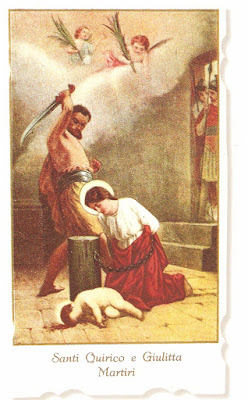 A Turkish widow, Julitta and her very young baby son, Cyriacus, moved to tarsus to escape persecution of Christians in Turkey. She was denounced to a ruling governor there, who questioned her while he played with Cyriacus. When she refused to give up her faith, she was given a death sentence. her son told the governor he was also Christian, the man was so enraged he threw the Cyriacus down the stairs, killing him before his mother. His dead corpse landed in front of his mother was about to be killed. When she saw her baby she was grieved but full of joy that her son had received the crown of martyrdom. Then she died by being beheaded.They died 304 AD. Julitta's body, along with that of Cyriacus, was flung outside the city, on the heap of bodies belonging to criminals, but two maids rescued the corpses of the mother and child and buried them in a nearby field. Their relics are at Nevers and in the monastery of Saint-Amand, Tournai. Centuries later, Cyriacus appeared to the Emperor Charlemagne, who was in danger of being gored by a boar while he was hunting. Cyriacus offered to save the emperor's life in exchange for clothing to cover his nakedness. Their are the patron saints of death of children and torture victims. This is all that is known about the Saints Julitta and Cyriacus of Iconium.

Prayer
Father almighty you gave us
the lives of Julitta and Cyriacus of Iconium
to be examples to live by.
May these two lives help us
defend your Holy name,
protect our faith,
and defend your church.
We ask this through Christ our lord.
AMEN
Child martyr Christians Emperor Charlemagne France June 16 martyrdom martyrs Saints Tarsus Tournai turkey