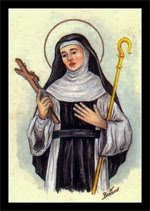 Born in the year 1126 in Germany, based and educated in a Benedictine monastery near Bonn, Germany, from 12 years of age.

Elizabeth came to see the monastery as their own home, and hoped in 1147.

She was sighted, starting in 1152 began to have mystical ecstasies and visions, had the gift of prophecy, and suffered attacks from demonic forces.

With the help of his brother Egbert, a monk and abbot, wrote three volumes describing their visions.

This is all that is known of Elizabeth of Schönau.