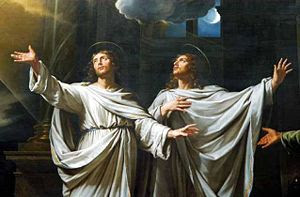 They are the Patron saints of Milan and of haymakers and are invoked for the discovery of thieves. Their Feast day in the Latin Rite of the Catholic Church is on June 19, the day marking the translation of their relics. In the Eastern Orthodox Church and in the Eastern Rites of the Catholic Church, their feast takes place on October 14 October 24 , the traditional day of their death. In Christian Iconography their emblems are the scourge, the club and the sword.

The Acta may have been expanded from a letter to the bishops of Italy, falsely ascribed to Saint Ambrose. They are written in a very simple style; it has not been possible to establish the date of their composition. According to these, Gervasius and Protasius were the twin sons of martyrs. Their father Saint Vitalis of Milan, a man of consular dignity, suffered martyrdom at Ravenna, possibly under Nero. The mother Saint Valeria died for her faith at Milan. Gervasius and Protasius were imprisoned, and visited in prison by Saint Nazarius.

The sons are said to have been scourged and then beheaded, during the reign of the Emperor Nero, under the presidency of Anubinus or Astasius, and while Caius was Bishop of Milan. Some authors place the martyrdom under the Emperor Diocletian, but others object to this time, because it is not clear how, in that case, the place of burial, and even the names, could be forgotten by the time of Saint Ambrose, as is stated. It probably occurred during the reign of Emperor Marcus Aurelius .

Saint Ambrose, in 386, had built a magnificent Basilica at Milan, now called the Basilica Sant'Ambrogio. Asked by the people to consecrate it in the same solemn manner as was done in Rome, he promised to do so if he could obtain the necessary relics. In a dream he was shown the place where such relics could be found. He ordered excavations to be made outside the city, in the cemetery Church of Saints Nabor and Felix, who were at the time the primary patrons of Milan, and there found the relics of Saints Gervasius and Protasius. In a letter, St Ambrose wrote "I found the fitting signs, and on bringing in some on whom hands were to be laid, the power of the holy martyrs became so manifest, that even whilst I was still silent, one was seized and thrown prostrate at the holy burial-place. We found two men of marvelous stature, such as those of ancient days. All the bones were perfect, and there was much blood."

St Ambrose had their relics removed to the Basilica of Fausta , and on the next day into the Basilica, accompanied in the texts by many miracles, emblemmatic of divine favor in the context of the great struggle then taking place between St Ambrose and the Arian Empress Justina. Of the vision, the subsequent discovery of the relics and the accompanying miracles, St Ambrose wrote to his sister Marcellina.
Italian Saints June 19. milan St. Ambrose St. Gervasius and Protasius