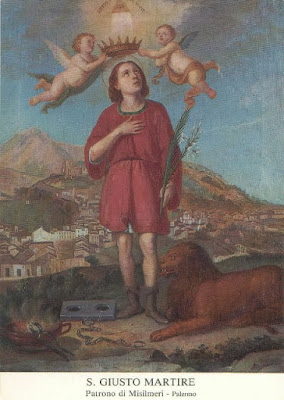 St. Justin was born in Samaria around 100 A.D., the son of noble Roman colonists. Greatly interested in philosophy, he studied all varieties of pagan wisdom - Stoicism, Pythagoreanism, and Platonism - until his conversion to Christianity about the year 130. He describes his conversion in his famous book, Dialogue with Trypho. Justin was walking by the sea near the town of Caesarea, when he met an old man who revealed the riches of the true Faith to him. The man told Justin about Jesus and the Hebrew prophets, and encouraged him to pray so that he would be able to understand the truth about God.

Justin used his great knowledge to teach. He explained to the pagans why they should not worship idols and revealed to them the mysteries of the true Faith. Justin traveled to other lands to debate publicly. He also wrote two open letters, The First Apology and The Second Apology, to the emperor Antonius Pius and his son, the philosopher, Marcus Aurelius. In these long, written arguments known as apologies, he explained and defended the Faith.

At last Justin incurred the wrath of a cynic philosopher, Cresens, for criticizing his immorality, and Justin was arrested for being a Christian. He was brought before the Roman prefect, Junius Rusticus, to be accused. Just before Rusticus sentenced him to death, he asked Justin, "If you are killed, do you suppose you will go to heaven?" "I do not suppose it," Justin answered, "but I know and am fully persuaded of it." Justin and five other martyrs were beheaded around the year 165.

St. Justin is considered the most important of the second century apologists, and is an outstanding model for lay apostles of today. His life was devoted to the task of harmonizing the wisdom of the world with those greater riches revealed in the true Faith.
christian apologist June 1. martyr pacifist St. Justin Theologian