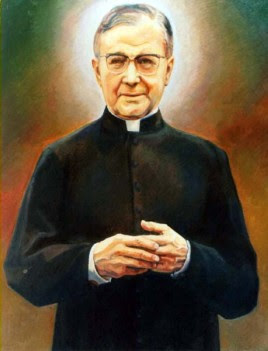 Josemaria Escriva de Balaguer was born in Barbastro (Huesca , Spain) on January 9, 1902 . Her parents named Joseph and Dolores. He had five siblings: Carmen (1899-1957) , Santiago (1919-1994) and three sisters younger than he , who died as children. Marriage Escrivá gave his children a deep Christian education. In 1915 the business went bankrupt father, a textile industrialist , and had moved to Logroño , where he found another job. In this city , Josemaría first notice his vocation after seeing footprints in the snow bare feet of a religious , senses that God wants something from him, but do not know exactly what it is. Think you can find out more easily if it is a priest and begins to prepare first in Logrono and later in the seminar of Zaragoza. Following an advice from his father, at the University of Zaragoza also consider civilian career as a student of law free. D. Escriva died in 1924 , and Josemaria remains as head of household. He was ordained priest on March 28, 1925 , he began his ministry in a rural parish and later in Saragossa. In 1927 he moved to Madrid with his bishop's permission to obtain a doctorate in law . In Madrid on October 2, 1928 , God makes you see the mission for years he had been inspiring, and founded the Opus Dei. From that day working with all their forces in the development of the foundation that God asks , while continuing to pastoral ministry has been instructed in those years, that puts you in daily contact with the disease and poverty in slums and hospitals Popular Madrid. At the outbreak of civil war in 1936 , Josemaria in Madrid. Religious persecution forced him to take refuge in different places. Exercised his priestly ministry clandestinely until she is out of Madrid. After a journey through the Pyrenees to the south of France , moved to Burgos. When the war ended in 1939 , he returned to Madrid. In the years that followed he gave many retreats to laity, for priests and religious. In the same year 1939 he finished his doctoral studies in law. In 1946 he settled in Rome. Obtained a doctorate in theology from the Lateran University . He was appointed consultant to two Vatican Congregations , an honorary member of the Pontifical Academy of Theology and a prelate of honor of His Holiness. Following closely the preparations and the sessions of Vatican II (1962-1965), and maintains an intense treatment with many of the Council Fathers . From Rome repeatedly traveling to different countries in Europe to promote the establishment and consolidation of Opus Dei in those places. With the same object, between 1970 and 1975 trips to Mexico long ago , the Iberian Peninsula , South America and Guatemala, where he met with groups of catechesis numerous men and women. He died in Rome on June 26, 1975 . Several thousand people , including many bishops of different countries , overall , one third of the world episcopate , " the Holy See requesting the opening of his cause of canonization. On May 17, 1992 , John Paul II beatified Escriva in St. Peter's Square in Rome, to 300,000. "With supernatural intuition, " the pope said in his homily, " Blessed Josemaria untiringly preached the universal call to holiness and apostolate." Ten years later, on October 6, 2002 , John Paul II canonized the founder of Opus Dei in St. Peter's Square before a crowd of more than 80 countries. The Holy Father, in his speech to participants at the canonization , said that " St. Josemaría was chosen by God to proclaim the universal call to holiness and to indicate that the life of everyday, common activities are road sanctification. You could say that was the saint of the ordinary. "

Prayer
Father almighty you gave us
St. Josemaria Escriva to be
an example of a holy
life to live by so we too
can be holy like he was.
AMEN