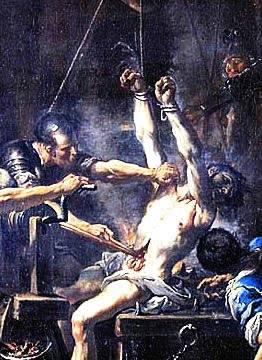 Saint Erasmus of Formia, died about 303 AD C. also known as St. Elmo is the patron saint of sailors.

James of Voragine in his Golden Legend, recognized as a bishop of Formiae and Campania, a hermit of the Lebanese mountains and a martyr killed during the persecutions of the Byzantine emperor Diocletian.

According to legend, when the persecutions of Diocletian began, Erasmus was forced to appear being a judge, beaten and spat on him after he caused lacerations that were to be bursting veins. Erasmus suffered these torments with a great presence of mind. They put him in a pit full of snakes and worms, sprayed with boiling oil and covered their hands with sulfur, but he withstood all these ordeals with a stoicism formidable "thanking and praising God." A terrible storm swept over his tormentors Erasmo saving them from certain death, the Saints were protecting him. Diocletian made him put on another waiting narrower pit of snakes and worms killed him.

A Diocletian was succeeded by the Roman emperor Maximian Hercule who, Voragine, "(...) was much worse than Diocletian." Erasmus continued preaching the Gospel and was again pursued. He plunged into a bath containing boiling water and attempted to shut him applying a mixture containing a molten metal. An angel came to her aid defense of their torturers. The Emperor, enraged, put him in a barrel studded with spikes and threw from the top of a mountain, rolling it, an angel came to save him. He suffered further torture:

"I pulled the teeth (...) with pliers. They tied to a pole and he was roasted on a gridiron ... fingers crossed it with some nails and tore his eyes. Naked, bound him hand and foot with some horses so that they dragged him until his veins bursting. "

This version of the Golden Legend, does not count how Erasmus fled to Mount Lebanon and survive by feeding on what ravens brought him a pre-Christian mystery, no doubt, interesting. He was recaptured, he was brought before the emperor who condemned him, was coated with pitch and burned (as were the early Christians during Nero's games), but ... survived. Returning to enclose with the intention of letting him starve to death, he composed them to get away with it.

Again He was recaptured and tortured in the province of Illyricum after having preached and converted many pagans to Christianity. Finally, and according to legend, "his stomach was split and his intestines were wound around a winch."

Erasmus was named patron of sailors because he continued to preach after a lightning opened the ground near him. This made the sailors believe that when it unleashes the storm at sea, calling on San Erasmo got rid of the danger of sinking. Electric shocks to the masts of the ships were seen as a sign of protection and therefore were called "St. Elmo's Fire."

Besides being the patron of sailors, is invoked, too, against colic, intestinal diseases, cramps and pains specific to women, and against the plague of the animals.

Prayer
Father almighty please let
us take the life of your son
St. Elmo to be an example of a
holy life to follow. So we can
always defend your name.
AMEN