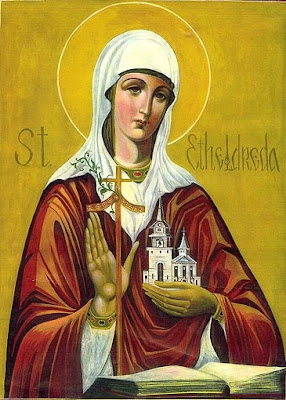 Sister of Saint Jurmin. Relative of King Anna of East Anglia, England. Princess. Widowed after three years marriage; rumor had it that the marriage was never consumated as Etheldrda had taken a vow of perpetual virginity. She married again for political reasons. Her new husband knew of her vow, but grew tired of living as brother and sister, and began to make advances on her; she refused him. He tried to bribe the local bishop, Saint Wilfrid of York, to release her from her vow; Wilfrid refused, and instead helped Audrey escape to a promontory called Colbert’s Head. A high tide then came in - and stayed high for seven days; it kept her separated from her husband and was considered divine intervention. The young man gave up; the marriage was annulled, and Audrey took the veil. She spent a year with her neice, Saint Ebbe the Elder. Founded the great abbey of Ely, where she lived an austere life.

Etheldreda died of an enormous and unsightly tumor on her neck. She gratefully accepted this as Divine retribution for all the necklaces she had worn in her early years.

In the Middle Ages, a festival called Saint Audrey’s Fair, was held at Ely on her feast day. The exceptional shodiness of the merchandise, especially the neckerchiefs, contributed to the English language the word tawdry, a corruption of Saint Audrey.
abbess Ely Cathedral June 23. St. Etheldreda