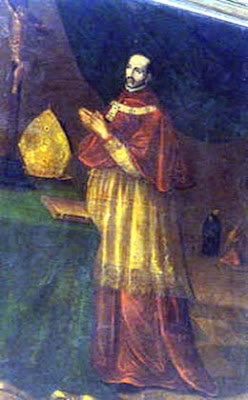 Born in Mayorga de Campos, Valladolid, Spain, of noble family and highly educated, Turibius was named after another Spanish saint, Turibius of Astorga. He became professor of law at the highly reputed University of Salamanca. His learning and virtuous reputation led to his appointment as Grand Inquisitor of Spain by King Philip II on the Court of the Inquisition at Granada. During this time, he was ordained priest in 1578 and sent to Peru. Though not yet of ecclesiastical rank, Turibius was named Archbishop of Lima, Peru, in May 1579.

He arrived at Paita, Peru, 600 miles from Lima, on May 24, 1581. He began his mission work by travelling to Lima on foot, baptizing and teaching the natives. His favourite topic was: "Time is not our own, and we must give a strict account of it." Three times he traversed the 180,000 square miles of his diocese, generally on foot, frequently defenceless and often alone; exposed to tempests, torrents, deserts, wild beasts, tropical heat, fevers and sometimes threats from hostile tribes; baptizing and confirming nearly one half million souls, among them St. Rose of Lima, and St. Martin de Porres.

He built roads, schoolhouses and chapels, many hospitals and convents, and at Lima, in 1591, founded the first seminary in the Western hemisphere. He inaugurated the first part of the third Lima Cathedral on February 2, 1604.

Turibius assembled thirteen diocesan synods and three provincial councils. He was seen as a champion of the rights of the natives against the Spanish masters. "There was great opposition to Turibius from the governors of Peru whose authority he challenged," Elizabeth Hallam has written. "He learned local dialects so that he could communicate with–-and convert–-the native peoples, and he was a strong and effective champion of their rights."

Years before he died, he predicted the day and hour of his death. At Pacasmayo he contracted fever, but continued labouring to the last, arriving at Saña in a dying condition. Dragging himself to the sanctuary he received the Viaticum, expiring shortly after on March 23, 1606.
Bishop March 23. Peru St. Martin of Porres St. Rosa de Lima