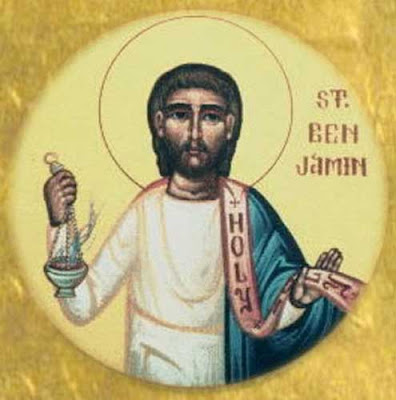 Saint Benjamin was a deacon martyred circa 424 in Persia. St. Benjamin was executed during a period of persecution of Christians that lasted forty years and through the reign of two Persian kings: Isdegerd I, who died in 421, and his son and successor, Varanes V. King Varanes carried on the persecution with such great fury, that Christians were submitted to the most cruel tortures.
Benjamin was imprisoned a year for his Christian Faith, and later released with the condition that he abandon preaching or speaking of his religion. His release was obtained by the Eastern Roman Emperor Theodosius II through an ambassador. However, St. Benjamin declared that it was his duty to preach Christ and that he could not be silent. As a consequence, St. Benjamin was tortured mercilessly until his death in the year 424.
Deacon. March 31 martyr Saint St. Benjamin