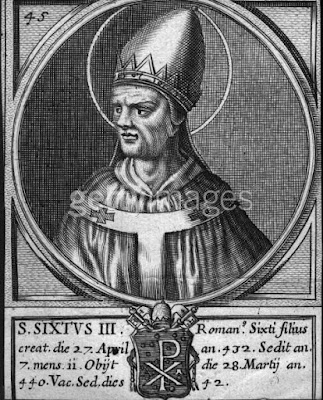 He was elected to the death of Pope St. Celestine I, in 432, and occupied the See of Peter for eight years were very full of demands.
During his lifetime he was involved almost permanently in the fight against the Pelagian doctrine, one of those who first detected the evil and fought the heresy that had to condemn the Pope Zosimus. In fact, Sixtus wrote two letters on this matter by sending them to Aurelius, bishop condemned Caelestius at the Council of Carthage, and St. Augustine. It was about the Church's great controversy about the supernatural grace and therefore need to perform good works for salvation.
Pelagius was a monk from the British Isles. He lived in Rome for several years gaining the respect and admiration of many for his ascetic life and his doctrine of stoic type, according to which man can attain perfection by his own effort, with God's help only extrinsic-kind examples, guidelines and disciplinary norms, and so on., - was a proactive! Furthermore, the doctrine had annexed the denial of original sin. And consequently rejects the need for the redemption of Jesus Christ. From this stems the sacramental inefficiency. A whole mess monumental theological based on false principles that naturally Rome could not afford.
And it was just that. Nestorianism has just been condemned at the Council of Ephesus in 431, one year before being elected Pope Sixtus III, but wrong doctrine about Jesus Christ that had been planted and the consequences do not disappear with council resolutions. Nestorius came from Antioch and bishop of Constantinople. Christology remained imprecise and misleading terminology as conceptual, asserting that in Christ there are two people and denying the divine maternity of the Virgin Mary was condemned by teaching
Sixtus III, Saint
contradict the Christian faith deposed from his seat, imprisoned or exiled to the monastery of St. Eutropius, in Antioch, dying unrepentant outside the communion of the Church. Pope Sixtus III tried with remarkable faith effort to reduce it to no avail and despite his futile efforts Nestorians misrepresented his words saying that the pope was against them.
Pope showered the slanders of his opponents. The emperor Valentinian and his mother Placida prompted a council to restore the fame and honor was in question. Baso-one of the main promoters of fuss unjustly deprived of his fame to the pope, dies repentant and forgiven so that it serves Sixto himself spiritually at the end of his life and comforted by the sacraments.
As every saint has to be pious, also took before his death in the year 440 in Rome, to repair and ennoble the ancient basilica of Santa Maria Maggiore who built the Pope Liberius, St. Peter and the St. Lawrence.

Prayer
Father may Pope Sixtus III
help us be religious like him
so we can always love the Eucharist
each and day of our life.
AMEN