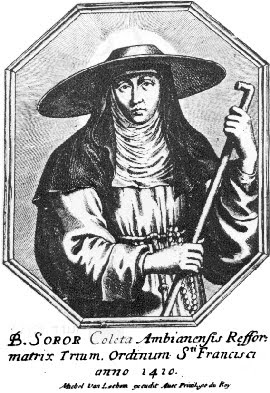 Colette was born in Corbie, in northern France, near Amiens, on 13 January 1381. Her parents, Robert Boylet carpenter and his wife Catherine, had become bigger without having children, but when no longer expected, providentially still had a daughter they named Nicolette, Colette familiarly, in gratitude to St. Nicholas of Bari, attributed to their intercession on having it. She grew up in a cozy and very religious. But he soon lost his father and mother, and his 18 years, undertook a complicated and varying religious experience in which, for seven years, might seem not quite to the destination that God wanted to take.
Following the advice Jesus gives in the Gospel, she sold all her possessions and distributed them among the poor. Then went from monastery to monastery, from institution to institution, without finding peace. First was in the Beguine, of which the Benedictines came to his hometown, they did not fulfill their spiritual anxieties, and then joined the Poor Clares, but unsatisfied again, chose the habit of the Third Order of St. Francis , which also found no rest her spirit, so determined, leads a solitary life, as "prison" in a small church near Corbie; this, however, was not what God wanted of her.
At 25 years ended his pilgrimage Coleta cloistered. She, from her deep life of poverty and prayer, she felt called to renew the Order of St. Clare, handing the spirit and enforcement that would give the holy founder in his Rule. Fr Henry de Baume, a Franciscan, he learned to discern God's plans and advised to return to Colette Clare. Obtained from the papal curia immunity from voting for life imprisonment, Colette went to Nice in 1406, where he was at that time, Benedict XIII, and explained in detail their comprehensive and restorative purposes. Benedict XIII, after careful and deep reflection, he realized that there was the hand of God, who was the woman who guided, therefore, using his power, he imposed the veil of Clare and authorized it to reform the monasteries of the Order and to establish new ones. This happened in the tragic days of the so-called "Schism", with potatoes and anti-popes at once, which ended in 1417. The Christians, in their bewilderment and goodwill, were on the side which were authentic or that they indicated their authorities. Thus St. Catherine of Siena and St. Catherine of Sweden were with the Pope of Rome, while St. Vincent Ferrer and St. Coleta were to Avignon, in particular with Benedict XIII.
It was not easy to Coleta immediately implement their projects. For some years his attempts at reform failed, until in 1410, the reform got a first monastery, Besançon, followed by others until a total of 16 or 17, reformed or sheath. For all of them written
Or Boylet Colette of Corbie Colette, Saint
some Constitutions, which were approved by the Church.
There were also convents of Franciscan monks, remained under the authority of their superiors, welcomed the fresh impetus of Colette and returned to the spirit and practices that Francis had wanted for his Order: The Life of unmitigated poverty, austere life, intense personal prayer and community, and much prayer and penance for the unity of the Church, then divided by the Western Schism.
The soul and engine of reform were certainly the life and example of Colette, who had come to surrender up to God to be perfectly accurate instrument. Her reputation for holiness attracted great enthusiasm both in monasteries and outside them. God also granted him extraordinary charismatic gifts: discernment of consciences, prophesy and even miracles. In difficult times for the Church and when the sons and daughters of St. Francis and St. Clare were in a state of obvious decay, God used a woman of the people, plain and simple to carry out a renovation, approved by the Minister General of the Franciscans in 1434 and by Pius II in 1458, corroborating the validity of fruit and then gave tapir has continued until today. Today the monasteries of "coletinas" are about 140, most of which are located in Europe, although there are in America, Asia and Africa.
He died at his monastery in Ghent (Belgium) on 6 March 1447, and canonized by Pope Pius VII in 1807.

Prayer
Father may the life of
your daughter Colette
help us in our every
day life to love you each
and every day.
We ask this through Christ
our lord.
AMEN