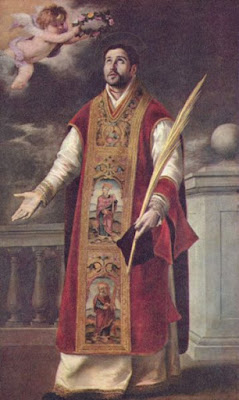 Martyrs of Spain. Roderic, also called Rudericus and Rodrigo, was a priest at Cabra who was assaulted by his two brothers, one a Muslim and the other a lapsed Catholic. He was denounced by the Muslim brother and imprisoned for falling away from the Islamic faith. Roderic proclaimed that he had always been a Christian, but was charged with apostasy. In prison, he met Salomon, a man under the same charge.

They were beheaded at Cordoba after a long period of imprisonment. There is another story which is very similar.

Roderick is venerated as one of the Martyrs of Córdoba. Tradition states that he was a Christian priest of Cabra who had two brothers: one was a Muslim, the other had no religion. Once, after his brothers began to fight one another, Roderick attempted to break up the fight. However, they turned on him instead and beat him.
When Roderick awoke, he found that his Muslim brother had reported to the authorities that Roderick had converted to Islam. When Roderick maintained his loyalty to the Catholic religion, he was accused of apostasy under Sharia law. He was imprisoned and then beheaded along with Salomon at Córdoba.
Islam March 13. Martyr of Cordoba Spain St. Roderick St. Rodrigo