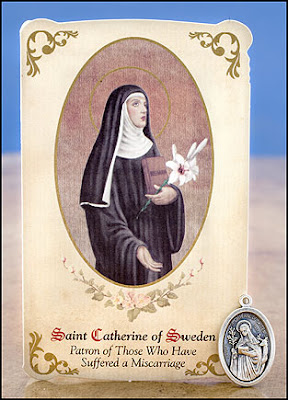 Catherine of Vadstena or Sweden was born around the year 1331 the marriage of Prince Birgesdotter Ulf Gudmarsson and Brigitta, was the fourth of eight children. The raised, as was common at the time, the heat of the monastery, in this case did Riseberga nuns.
She married Earl Egar Lyderson good Kyren with whom they agreed to live a chaste marriage, which influences positively in noble environments plagued by frivolous and secular customs.
Bridget, her mother, has been revealed to found the Order of the Holy Savior that aims to praise the Lord and the Blessed Virgin according to the liturgy of the Church, to repair for the offenses he receives from men, propagating the contemplative prayer, preferably -Passion for the salvation of souls.
Mother and daughter are together in Rome. When Catherine plans to return home with the husband, his daughter Bridget informs another supernatural revelation of God: his son is dead. This will determine the course of Catherine's life ever since. Before the logical psychic pain and depression sufferer, is removed from the situation by the Virgin. It is in these circumstances when she shows to her mother's firm internal arrangement to pass all sorts
Catherine of Sweden, Saint
of hardship and suffering for Christ. The two together and begin a time of intense prayer, mortification and extreme poverty, their bodies know only the hard ground to sleep are visiting churches and charity. The young widow rejects proposals of marriage that arise frequently, until reaching some impertinence and harassment. Pilgrimages to famous shrines and arrange a visit to the Holy Land to soak up the love of God in the places where the Savior suffered and died.
In the year 1373 have returned, died in Rome Bridget and Catherine gave provisional burial in the Eternal City to the corpse of his mother in the church of San Lorenzo. The transfer of the body in a funeral procession to Sweden is a continuous missionary activity through which it passes. Catherine spoke of the mercy of God who always expects the conversion of sinners, is counting the revelations and predictions that God gave to His holy mother.
Söderköping homeland is the place to get the procession in 1374 as if it were an act of triumph. Conversions and miracles are told that occur to deposit the remains in the monastery of Vadstena, where he comes and stays Catalina, practicing the rule that lived for twenty years with his mother.
A second trip to Rome last five years, will aim at the start of the process of canonization of St. Bridget's future and the adoption of the Order of the Holy Savior. On his return to Vadstena, died on 24 March 1381.
Apart from the revelations and predictions had made the holy supernatural, she is told the fineness of soul that led him to confession daily for twenty years-not for being scrupulously and got the unrepentant confession sorry about died. There is also talk of lights surrounding the dead body after his death, a star that was seen for a while stating the place of rest and luminosity that shone beside the sarcophagus. No wonder that the legend has wanted to leave his mark trying to make sense to discover the magnanimity of his soul which is only perceptible by the external. So said they never sucked the milk of the mother worldly chest while looking for his mother and other women holy honest. Also told Rome that spared flood entering their feet on the Tiber and spoke of the liberation of one possessed.
Anyway, the saints of yesterday and today, have always been turning points of grace for the good of all men.
His cult was confirmed by Pope Innocent VIII in 1784.

Prayer
Father may Catherine of Sweden
help us become more religious
so we mat go love your more
eaach and every day.
AMEN