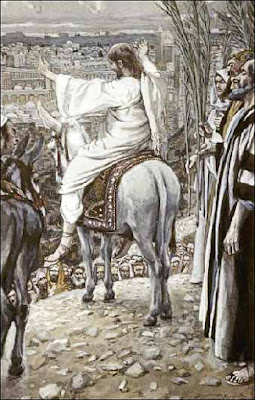 In fulfillment of prophecy (Isaiah 62:11 & Zechariah 9:9), Jesus rode into Jerusalem on a donkey. The crowds lined the street shouting "Hosanna! Blessed is He who comes in the name of the Lord." (Psalm 118:25-26) They placed palm branches and robes in front of Jesus. This was particularly disturbing to the religious leaders who were jealous of Jesus. They demanded that Jesus silence the crowd, but he responded that even if the crowd were silent, the stones would cry out.

The events of the next week would forever change the world. Jesus entered Jerusalem and the crowd welcomed him as a king. By the end of the week they were demanding his death. His followers abandoned him in fear. None of his close followers had really understood the events of Palm Sunday and Holy Week until after Jesus returned. They had all expected Jesus to be an earthly king, but God had given them something so much better - an open door into a Kingdom that would never end.
2010 Jesus Christ. March 28 Palm Sunday Passion Week Red solemnity Special Blog